Europe’s role in international drug production and trade is changing, according to new analyses released today by the EU drugs agency (EMCDDA) and Europol. In an in-depth look at the cocaine and methamphetamine markets, the agencies point to increased production activities in Europe and how collaboration between criminal groups worldwide is creating new security threats and expanding the market.

The new analyses cover trends along the supply chain from production and trafficking to distribution and use. They describe a large and expanding cocaine market and a currently small, but steadily growing, methamphetamine market in the EU. They also warn of the heightened threat posed by innovation in production processes and chemical precursors, and a growing range of products that may be hazardous to consumers.

EMCDDA Director Alexis Goosdeel says: ‘Our new analyses show that we are now facing a growing threat from a more diverse and dynamic drug market, that is driven by closer collaboration between European and international criminal organisations. This has resulted in record levels of drug availability, rising violence and corruption, and greater health problems. In response, we need to be even more sensitive to signals coming from the market and invest in greater coordinated action, not only in Europe, but also with our international partners in producer and transit countries’.

Europe is a major synthetic drug producing region, both for domestic and external markets. Increasingly, it is also a key trans-shipment point for drugs originating elsewhere and destined for other world regions. For both cocaine and methamphetamine, there is evidence that Latin American and European criminal groups are partnering in production, trafficking and distribution.

Europol’s Executive Director Catherine De Bolle stresses: ‘The trade in illegal drugs continues to dominate serious and organised crime in the EU, and nearly 40% of the criminal networks operating at the international level reported to Europol are active in drug trafficking. Fighting this illegal trade is a key priority for Europol and the EU. Today’s analysis supports us in understanding the market dynamics and is crucial for formulating effective law enforcement responses’.

Today’s findings draw on data and information from the EMCDDA’s drug monitoring system and on Europol’s operational intelligence on organised crime. Taking a threat assessment approach, the agencies present key areas for action at EU and Member State level. These include: rapidly identifying emerging health and security threats, investing in forensic and toxicological capacity to keep pace with innovation, targeting the illicit drug supply chain and reducing vulnerabilities at external borders.

Today’s analysis shows that the European cocaine market is expanding, driven by unprecedented levels of trafficking leading to historically high availability. High levels of cocaine production in South America have resulted in record quantities seized in Europe. Europe is also a destination and transit zone for cocaine bound for the Middle East and Asia. More production is also now taking place inside Europe, indicating changes in the region’s role in the international cocaine trade. A large variety of individuals and criminal networks shape the complex supply of cocaine to, and within, the EU. The potential for new smokable cocaine products to emerge on the market raises concerns about future health risks. 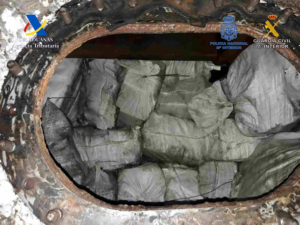 Cocaine is the second most commonly consumed illicit drug in the EU after cannabis, with a market retail value in 2020 estimated at EUR 10.5 billion (range EUR 7.7 billion to 12.8 billion). Around 3.5 million Europeans (15–64 years) report having used the drug in the past year, 14 million in their lifetime. While cocaine use remains concentrated in the south and west of Europe, the market appears to be spreading eastward.

For the fourth consecutive year, record amounts of cocaine (214.6 tonnes) were seized in Europe in 2020, a 6% increase from 2019, suggesting high availability of the drug. Three countries — Belgium (70 t), the Netherlands (49 t) and Spain (37 t) — accounted for around three-quarters of the European total, but large quantities were also seized by Italy (13.4 t), France (13.1 t), Germany (11 t) and Portugal (10 t). Most cocaine seized in Europe arrives in maritime shipping containers. Entry points of cocaine shipments are diversifying, with greater amounts seized in ports in Eastern Europe and Turkey.

Most cocaine manufacturing still takes place in Colombia, Bolivia and Peru. The new analysis describes however, how cocaine processing is now taking place inside Europe (mainly in Belgium, Spain and the Netherlands). Large quantities of chemical precursors used in cocaine production have been seized from illicit production laboratories and at European borders. Recent data also suggest that large amounts of cocaine powder have been processed in Europe from intermediary products, such as coca paste and cocaine base. Some of these are smuggled from South America in carrier materials (e.g. charcoal, plastics) and then extracted in specialised facilities. Availability in Europe of large amounts of cocaine base and coca paste creates a risk of new smokable cocaine products (e.g. ‘crack’) emerging on European consumer markets, posing considerable health and social risks.

Methamphetamine — the most widely consumed synthetic stimulant drug in the world — still plays a relatively small role in Europe’s drug market. Nevertheless, the latest analysis shows the growing threat posed by this drug in the region, as availability increases and use spreads to new areas. Methamphetamine is produced inside the EU to supply both domestic and external markets. Europe is also a destination and transit zone for this drug from other production hubs (e.g. Iran, Nigeria, Mexico) bound for Asia and Oceania. The emerging methamphetamine industry in Afghanistan poses a threat to the EU, given competitive prices and long-established drug trafficking routes to Europe.

Today’s analysis shows that long-term trends point to a steady market expansion. Between 2010 and 2020, the

In 2020, nine EU Member States reported the dismantling of 215 methamphetamine laboratories. Historically production in Europe typically occurred in small, but widespread, ‘kitchen’ laboratories in Czechia and its neighbouring countries.

While these still exist, there is now growing concern about production facilities located in Belgium and the Netherlands, where methamphetamine can be produced on a considerably larger scale.

Methamphetamine facilities detected in Belgium and the Netherlands have increased in size, sophistication and output since 2019.

Recognising the profitability of methamphetamine, European synthetic drug producers are now seen to be working with Mexican criminal groups to develop production processes and exploit existing infrastructure in Europe.

In addition to methamphetamine produced in Europe, multi-tonne quantities of the drug originating in Mexico have been seized in the EU since 2019, also implying collaboration between European and Mexican criminal networks.

An additional development is the production of methamphetamine in Afghanistan, although currently the country does not appear to be a major source of supply to the EU. Nevertheless, given the relatively low wholesale price of Afghan methamphetamine, criminal networks may consider it economically attractive to traffic the drug into the EU along established heroin trafficking routes. 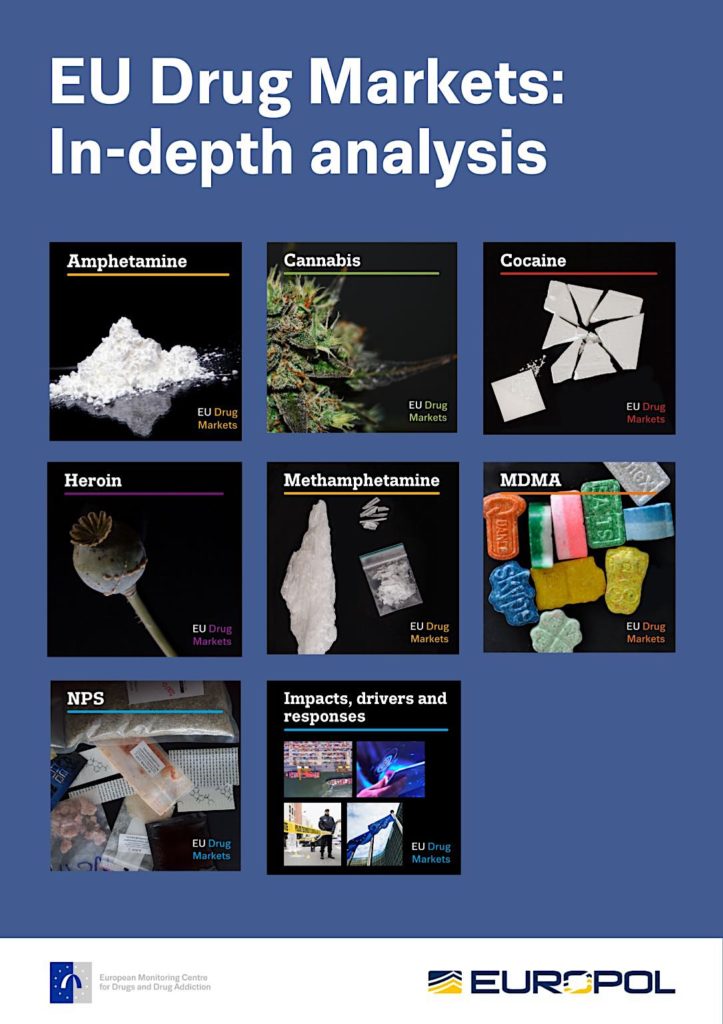 Methamphetamine use in Europe has historically been concentrated in Czechia and Slovakia, but use appears to be spreading elsewhere. Latest wastewater data reveal that the drug is also present in Belgium, Cyprus, the east of Germany, Spain, Turkey and several northern European countries (e.g. Denmark, Latvia, Lithuania, Finland, Norway). Of the 58 cities with data on methamphetamine residues in municipal wastewater for 2020 and 2021, around a half (27) reported an increase.

With greater amounts of methamphetamine present on the European market, there is concern around increased demand for the drug, particularly in its smokable form (‘crystal meth’). This could have long-term implications, including a greater burden on health systems and a threat to public safety.

Logistics — an emerging parallel business: While established criminal networks often manage their own activities, others now outsource a range of services along the supply chain. Today’s analyses show how logistical support has become a parallel business, with some criminal groups specialised in providing the chemicals, equipment and expertise needed to set up and operate production facilities. Analysis of encrypted criminal communications, through recent high-profile operations, have shown that trade is often reliant on a web of facilitators and brokers who connect producers, transporters and distributors. European criminal networks are boosting production efficiency drawing on the know-how of their counterparts in Latin American drug-producing regions.

Rising violence and corruption: Violence and corruption, long seen in traditional drug-producing countries, are increasingly seen within the EU. The analyses highlight that, in some EU Member States (Belgium, Spain, France, Netherlands), competition between drug suppliers has intensified, resulting in an increase in violent clashes. The expanding EU cocaine market has brought with it a rise in homicides, kidnappings and intimidation, with violence spilling over to those outside the drug market (e.g. lawyers, government officials, journalists). Meanwhile, the growth of large-scale production of methamphetamine in Europe has the potential to ‘drive more corruption along the supply chain, creating a parallel economy’. Corruption has been identified as a key threat in the EU, with almost 60% of criminal networks estimated to use corruption as a facilitator.

Environmental damage, risks and costs: A prominent cross-cutting theme in today’s findings is the environmental impact of drug production. This includes the dumping of chemical waste, which can result in ecological damage, public safety risks and high clean-up costs. Fatalities have been recorded in synthetic drug production laboratories in Belgium and the Netherlands in recent years, due to fires, explosions or suffocation from carbon monoxide or other toxic fumes.

COVID-19 impact on markets: Despite the unprecedented disruption caused by the COVID-19 pandemic, cocaine and methamphetamine markets in the EU have continued to evolve. Analyses show that COVID-19 restrictions were felt more at retail than wholesale level, where cocaine trafficking via maritime routes continued at pre-pandemic levels. Retail drug markets were disrupted during the early lockdowns, although dealers quickly adapted using new methods (encrypted messaging services, social media apps, online sources and home deliveries). In 2020, methamphetamine was one of the drugs most often seized in postal consignments.