The most fashionable cities of the planet embark on titanic constructions, wanting to compete in the norms of excess for the sole purpose of impressing. In Monaco, the architect Alexandre Giraldi designed a pharaonic project, but which has the particularity of being a masterpiece of urban integration in a setting of Mediterranean luxury. It is not just an arrow to the sky, but a state-of-the-art megastructure offering a wide variety of opportunities for the principality’s residents.

This project is the result of the perception and vision of the Marzocco Group, promoter of the Odéon Tower, and VINCI Immobilier. Although the architect Giraldi managed to fully integrate the waterfront, her particularly high-end interior design is a success signed Laura Sessa. The Testimonio II complex perfectly complements this area of the Principality by its proximity to the luxurious Monte-Carlo Bay Hotel & Resort as well as numerous leisure and business centres.

The two residential towers are 95 and 100 metres high respectively. They derive their particularity from large, airy balconies that offer a splendid view of Monaco and the Mediterranean. The 348 state apartments also feature beautiful landscaped gardens and public spaces, as well as secure private parking.

A DIVERSITY OF SERVICES THAT MEETS THE RESIDENT’S EXPECTATIONS

The current systematic trend is to combine homes and shopping malls. But the Marzocco group has designed a broader project by responding to Monegasque problems.

While more than 1,100 parking spaces are planned to relieve local traffic, other initiatives aim to position Monegasque excellence on a more international level. Turned towards the youth, an international school equipped with the latest generation of teaching materials will be created and will be able to accommodate up to 700 students from all over the world who will bring an intense cultural abundance as well as a youth dynamism so conducive to developing new ideas.

The family aspect has not been forgotten, since a nursery with 50 cribs has also been planned to better meet the current demand. It will enjoy a bright, quiet and peaceful environment, on the ground floor of the highest tower, and a road access from the Boulevard d’Italie, Monaco’s main shopping avenue. Divided into sections by age groups, the area includes wake-up and play areas, sleeping areas, treatment rooms and peaceful terraces.

THE BAY HOUSE OR SOME 150,000M2 OF HOUSING INCLUDING 348 STATE-OWNED APARTMENTS OUT OF A TOTAL PROJECT OF 407 HOUSING UNITS

The “Domaine de Monaco department” has invested heavily in this project, since no fewer than 348 apartments for Monegasques have been included in the project. This investment allows Monegasques not to be penalized by the reality of the rather high rents due to the presence of many wealthy investors and residents. They benefit from much lower rent rates than those paid by foreigners.

Public housing, that is to say, under the Domain of the State, is allocated to Monegasque households according to their normal needs. The allocation priorities are based on a cumulation of points whose scale has been set by Ministerial Order. *

This policy is regularly carried out by the Monegasque authorities who do not hesitate to invest in the construction of new buildings in order to meet the needs of Monegasques. Recently in the project of the Odéon Tower, a building of 49 floors of 170 meters high, also built by the Marzocco Group and designed by Alexandre Giraldi, architect, the nationals had been able to obtain 152 apartments at privileged rents.

A PRIVATE RESIDENTIAL PART INCLUDING 5 GEMS

Apart from state-owned housing for Monegasques, the Testimonio II project consists of a private residential part of high standing with stunning

views of the Mediterranean. More specifically, this area will consist of 59 prestigious residences, including 54 particularly spacious apartments, with areas ranging from 250 m2 to 1,000 m2.  The residence will have three to six bedrooms depending on the models, spacious rooms to receive as well as bay windows and balconies facing south, towards the sea.   But one of the main points of prestige of this project is the construction of five very luxurious villas integrating from 1,400 to 2,500 m2 and this, on several levels.

Each of the villas will have its own garden-terrace and swimming pool. In addition, residents will be able to benefit from many high-end services such as a concierge service operating on the same principle as palaces, valet parking or shuttles to connect the main points to the surroundings and various equally high-end facilities such as a spa, fitness center, or meeting rooms. 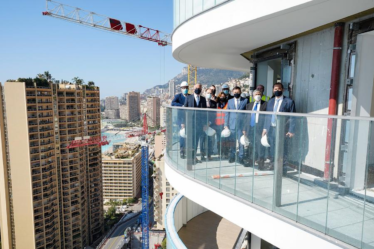 *As initiated by H.S.H. Prince Rainier III, and under constant development, the State housing sector enables Monegasques to be housed in apartments belonging to the State. The apartments are allocated according to criteria defined by Ministerial Order.

This ambitious plan, will increase the capacity of state-owned housing by 43% over the next 15 years, to reach a total of 4,548 homes.

The State Property Authority has 3,334 dwellings in Monaco, allocated by State Housing Commissions, and 600 in the nearby French cities of Beausoleil and Cap d’Ail for Government officials or those employed by State-owned firms, of nationalities other than Monegasque.

There are around 33,000 residents in Monaco, most of which are wealthy foreigners but only 6.000 Monegasques from which a majority cannot afford the high rents.

Although the cost of these constructions is considerable, it remains a Government priority to serve the population and provide adequate housing.

AN ADDRESS TO IMPRESS

PUTTING OUT FIRE WITH BLOOD – Can anyone help the beleaguered refugees of Afghanistan?

CASTLES IN (AND ON) THE AIR – Tune In, Turn On, Wave a Flag, Get Angry