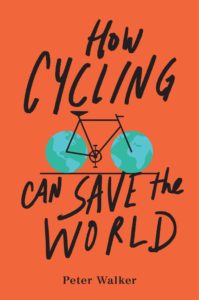 HOW CYCLING CAN SAVE THE WORLD

Peter Walker—reporter at the Guardian and curator of its popular bike blog—shows how the future of humanity depends on the bicycle.

Car culture has ensnared much of the world—and it’s no wonder. Convenience and comfort (as well as some clever lobbying) have made the car the transportation method of choice for generations. But as the world evolves, the high cost of the automobile is made clearer—with its dramatic effects on pollution, the way it cuts people off from their communities, and the alarming rate at which people are injured and killed in crashes. Walker argues that the simplest way to tackle many of these problems at once is with one of humankind’s most perfect inventions—the bicycle. In How Cycling Can Save the World, Walker takes readers on a tour of cities like Copenhagen and Utrecht, where everyday cycling has taken root, demonstrating cycling’s proven effect on reducing smog and obesity, and improving quality of life and mental health. Interviews with public figures—such as Janette Sadik-Khan, who led the charge to create more pedestrian- and cyclist- friendly infrastructure in New York City—provide case studies on how it can be done, and prove that you can make a big change with just a few cycling lanes and a paradigm shift. Meticulously researched and incredibly inspiring, How Cycling Can Save the World delivers on its lofty promise and leads readers to the realization that cycling could not only save the world, but have a lasting and positive impact on their own lives. 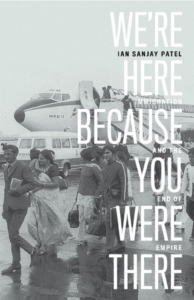 WE’RE HERE BECAUSE YOU WERE THERE

IMMIGRATION AND THE END OF EMPIRE

What are the origins of the hostile environment for immigrants in Britain?

Drawing on new archival material from the Foreign and Commonwealth Office, Ian Sanjay Patel retells Britain’s recent history in an often shocking account of state racism that still resonates today. In a series of post-war immigration laws, Britain’s colonial and Commonwealth citizens from the Caribbean, Asia and Africa were renamed immigrants. In the late 1960s, British officials drew upon an imperial vision of the world to contain what it saw as a vast immigration ‘crisis’ involving British citizens, passing legislation to block their entry. As a result, British citizenship itself was redefined along racial lines, fatally compromising the Commonwealth and exposing the limits of Britain’s influence in world politics. Combining voices of so-called immigrants trying to make a home in Britain and the politicians, diplomats and commentators who were rethinking the nation, Ian Sanjay Patel excavates the reasons why Britain failed to create a post-imperial national identity. The reactions of the British state to post-war immigration reflected the shift in world politics from empires to decolonization. Despite a new international recognition of racial equality, Britain’s colonial and Commonwealth citizens were subject to a new regime of immigration control based on race. From the Windrush generation who came to Britain from the Caribbean to the South Asians who were forced to migrate from East Africa, Britain was caught between attempting both to restrict the rights of its non-white colonial and Commonwealth citizens and redefine its imperial role in the world. Despite Britain’s desire to join Europe, which eventually occurred in 1973, its post-imperial moment never arrived, subject to endless deferral and reinvention. 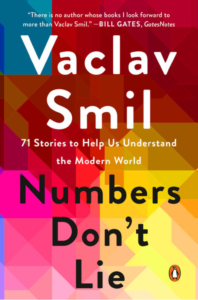 71 STORIES TO HELP US UNDERSTAND THE MODERN WORLD

“There is no author whose books I look forward to more than Vaclav Smil.”– Bill Gates

An essential guide to understanding how numbers reveal the true state of our world–exploring a wide range of topics including energy, the environment, technology, transportation, and food production.

Vaclav Smil’s mission is to make facts matter. An environmental scientist, policy analyst, and a hugely prolific author, he is Bill Gates’ go-to guy for making sense of our world. In Numbers Don’t Lie, Smil answers questions such as: What’s worse for the environment–your car or your phone? How much do the world’s cows weigh (and what does it matter)? And what makes people happy? From data about our societies and populations, through measures of the fuels and foods that energize them, to the impact of transportation and inventions of our modern world–and how all of this affects the planet itself–in Numbers Don’t Lie, Vaclav Smil takes us on a fact-finding adventure, using surprising statistics and illuminating graphs to challenge conventional thinking. Packed with fascinating information and memorable examples, Numbers Don’t Lie reveals how the US is leading a rising worldwide trend in chicken consumption, that vaccination yields the best return on investment, and why electric cars aren’t as great as we think (yet). Urgent and essential, with a mix of science, history, and wit–all in bite-sized chapters on a broad range of topics–Numbers Don’t Lie inspires readers to interrogate what they take to be true. 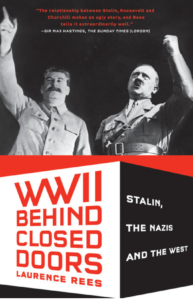 Stalin, The Nazis and the West

In this revelatory chronicle of World War II, Laurence Rees documents the dramatic and secret deals that helped make the war possible and prompted some of the most crucial decisions made during the conflict. Drawing on material available only since the opening of archives in Eastern Europe and Russia, as well as amazing new testimony from nearly a hundred separate witnesses from the period—Rees reexamines the key choices made by Stalin, Churchill and Roosevelt during the war, and presents, in a compelling and fresh way, the reasons why the people of Poland, the Baltic states, and other European countries simply swapped the rule of one tyrant for another. Surprising, incisive, and endlessly intriguing, World War II Behind Closed Doors will change the way we think about the Second World War.

“Rees is vastly well informed about the second world war. His judgments can seldom be faulted. . . . There are many surprises here, and much good detail. . . . The relationship between Stalin, Roosevelt and Churchill makes an ugly story, and Rees tells it extraordinarily well.”
—Sir Max Hastings, The Sunday Times (London)

“A powerful and moving reminder that behind the generalizations of historians lie the fates of real human beings. . . . Amply worth reading.”
—David Stafford, History Today

DOWN ON THE PHARM Raising drug prices is addictive

SUPER MARIO TO THE RESCUE! – CAN THE FORMER BOSS OF THE EUROPEAN CENTRAL BANK SAVE ITALY

IF YOU PRICK US, DO WE NOT BLEED? – ANTI-SEMITISM CONTINUES TO CONFOUND JUSTICE IN TODAY’S EUROPE