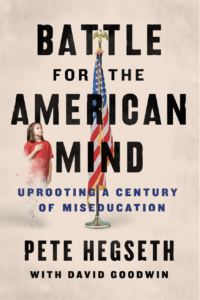 BATTLE FOR THE AMERICAN MIND: UPROOTING A CENTURY OF MISEDUCATION

Fox News host and New York Times bestselling author Pete Hegseth delivers his most important book yet: an excoriating examination of the state of America’s broken education system that offers a helpful road map to raising children to uphold the values Americans have always treasured. Conservatives are familiar with the craziness on college campuses. They also have long assumed that colleges and universities are self-contained ecosystems with little impact on the broader culture and K-12 education. But the radical ideologies pervading higher education have now infected nearly all of America’s education systems. In an Idaho school district, books like A Is for Activist, Antiracist Baby, and Not My Idea: A Book about Whiteness are read to elementary students. In Massachusetts, Cambridge Public Schools’ “Early Childhood Curriculum” teaches black families to be “free from patriarchal practices” as part of the “disruption of Western nuclear family dynamics.” Our kids receive the same barrage of progressive messages from Hollywood and social media, Pete Hegseth charges. In The Battle for the American Mind he explains the critical mistakes conservatives make when it comes to education in America. He shows why, no matter what political battles conservatives win, progressives are winning the war–one student at a time. Most importantly, he reveals an all but lost philosophy of education that has the potential to reverse these troubling tends. And he shares what he is doing to raise his own children in a way that instills in them the values Americans have always treasured. (Thriftbooks.com) 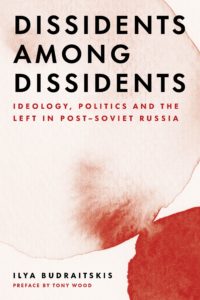 IDEOLOGY, POLITICS AND THE LEFT IN POST-SOVIET RUSSIA

How have the fall of the USSR and the long dominance of Putin reshaped Russian politics and culture?

Ilya Budraitskis, one of the country’s most prominent leftist political commentators, explores the strange fusion of free-market ideology and postmodern nationalism that now prevails in Russia, and describes the post-Soviet evolution of its left. He incisively describes the twists and contradictions of the Kremlin’s geopolitical fantasies, which blend up-to-date references to “information wars” with nostalgic celebrations of the tsars of Muscovy. Despite the revival of aggressive Cold War rhetoric, he argues, the Putin regime takes its bearings not from any Soviet inheritance, but from reactionary thinkers such as the White émigré Ivan Ilyin.

Budraitskis makes an invaluable contribution by reconstructing the forgotten history of the USSR’s dissident left, mapping an entire alternative tradition of heterodox Marxist and socialist thought from Khrushchev’s Thaw to Gorbachev’s perestroika. Doubly outsiders, within an intelligentsia dominated by liberal humanists, they offer a potential way out of the impasse between condemnations of the entire Soviet era and blanket nostalgia for Communist Party rule–suggesting new paths for the left to explore. 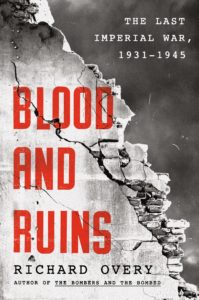 Richard Overy sets out in Blood and Ruins to recast the way in which we view the Second World War and its origins and aftermath. As one of Britain’s most decorated and respected World War II historians, he argues that this was the “last imperial war,” with almost a century-long lead-up of global imperial expansion, which reached its peak in the territorial ambitions of Italy, Germany and Japan in the 1930s and early 1940s, before descending into the largest and costliest war in human history and the end, after 1945, of all territorial empires.

Overy also argues for a more global perspective on the war, one that looks broader than the typical focus on military conflict between the Allied and Axis states. Above all, Overy explains the bitter cost for those involved in fighting, and the exceptional level of crime and atrocity that marked the war and its protracted aftermath—which extended far beyond 1945.

Blood and Ruins is a masterpiece, a new and definitive look at the ultimate struggle over the future of the global order, which will compel us to view the war in novel and unfamiliar ways. Thought-provoking, original and challenging, Blood and Ruins sets out to understand the war anew. 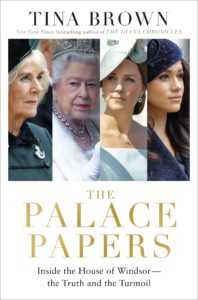 “Never again” became Queen Elizabeth II’s mantra shortly after Princess Diana’s tragic death. More specif­ically, there could never be “another Diana”—a mem­ber of the family whose global popularity upstaged, outshone, and posed an existential threat to the Brit­ish monarchy.

Picking up where Tina Brown’s masterful The Diana Chronicles left off, The Palace Papers reveals how the royal family reinvented itself after the trau­matic years when Diana’s blazing celebrity ripped through the House of Windsor like a comet.

Brown takes readers on a tour de force journey through the scandals, love affairs, power plays, and betrayals that have buffeted the monarchy over the last twenty-five years. We see the Queen’s stoic re­solve after the passing of Princess Margaret, the Queen Mother, and Prince Philip, her partner for seven decades, and how she triumphs in her Jubilee years even as family troubles rage around her. Brown explores Prince Charles’s determination to make Camilla Parker Bowles his wife, the tension between William and Harry on “different paths,” the ascend­ance of Kate Middleton, the downfall of Prince An­drew, and Harry and Meghan’s stunning decision to step back as senior royals. Despite the fragile monar­chy’s best efforts, “never again” seems fast approaching.

Tina Brown has been observing and chronicling the British monarchy for three decades, and her sweeping account is full of powerful revelations, newly reported details, and searing insight gleaned from remarkable access to royal insiders. Stylish, witty, and erudite, The Palace Papers will irrevoca­bly change how the world perceives and under­stands the royal family.

CARTOON OF THE MONTH