In the realm of shipping, there are sailors and captains around the world who carry a secret guilt that will remain forever unspoken. Many a time, a ship’s crew and captain have probably returned to port with the weight of a guilty conscience ; for how can one love the sea and the oceans so much, and yet continue to pollute them ?

Unravelling the impact of human activity on marine ecosystems was the first stage in the search for a zero emission solution. It was after acknowledging the destructive nature of her love for the Mediterranean that Chloé Zaied, the founder of the Hynova Project found the strength to bring off the search for a sailing craft that would combine pleasure, performance, economy and eco-friendliness.

Besides being a female captain – a rare occurrence in itself – Chloé Zaied has also found other means of setting herself apart in the shipbuilding industry. Her approach goes well beyond simple entrepreneurship ; she has had glimpses of a future where cleaner sailing would have no negative impact on either the ecosystem or on our wallets.

The Hynova project’s ultimate solution comes down to hydrogen. With some boats able to reach speeds of up to 26 knots, hydrogen allows for an efficient combination of high performance and significant autonomy, although this is of course, subject to various user profiles.

Hynova designs, produces and commercialises the most eco-friendly boats.

The secret of the Hynova project lies in its 100% electric propulsion system. A powerful fuel cell enables hydrogen to supply electricity for charging the batteries, with water as the only end product. Any risk of oil leakage and the emission of fine particles is thus eliminated.

This is a real boon to the pleasure craft industry. Hynova is the sole manufacturer in the world to offer electro-hydrogen propulsion as an alternative to the current systems that have transformed this competitive maritime sector into one of the biggest contributors to marine pollution. 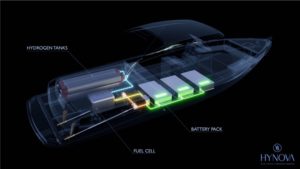 WHAT IS ‘GREEN HYDROGEN’ ?

There are a number of different methods for producing hydrogen and these can vary widely to say the least. ‘Blue’ and ‘grey’ hydrogen together represent 95% of world gas consumption. They are extracted from fossil fuels, mainly natural gas. Catalysers made of metal compounds such as nickel, chrome, iron and copper are used to facilitate the chemical reaction of water heated to nearly 1000 degrees Celsius. However, these techniques are highly energy-intensive and are accompanied by the emission of large quantities of carbon dioxide.

For the production of one tonne of hydrogen, 10 to 11 tonnes of carbon dioxide are emitted into the atmosphere. As a result, the production of hydrogen on the global scale is responsible for the emission of some one billion tonnes of carbon dioxide per year. According to the International Renewable Energy Agency (IRENA), this figure represents the total combined emissions of Indonesia and the United Kingdom.

Of the different types of hydrogen production grouped by colour categories, it is the ‘Green’ and ‘Yellow’ varieties that have been singled out by different governments as the fuel of the future.

Green hydrogen is derived without any CO2 emissions, through the electrolysis of water. This process consists in the decomposition of water – the quintessential natural compound – into oxygen and hydrogen by the use of an electric current. If this electricity is the product of renewable energies such as wind and solar power, then the resulting hydrogen is labelled ‘Green’. If, on the other hand, the electricity used in the process comes from a nuclear power station which is often the case in France for example, then the resulting hydrogen is labelled ‘Yellow’.

As far as the Hynova Project is concerned, ‘yellow’ hydrogen does not constitute a satisfactory compromise; it is obtained from uranium, which is a fossil fuel that is far from being renewable. In fact, the production of yellow hydrogen leads to radioactive waste that is dangerous and cannot be got rid of.

The green hydrogen used by Hynova is extracted from desalinised water. 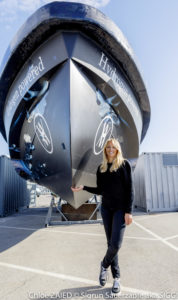 Maritime law is gradually pushing for more restrictions and even prohibition for CO2 emitting vessels to access the most beautiful and most protected sites in the world, the very sites that are generally sought-after by the very wealthy. Today, hydrogen powered sailing may be considered avant-garde by charter operators, but in the near future it will become mandatory if the new regulations are to be implemented. The customer base will have no alternative but to embrace green hydrogen or other clean sources of energy.

Throughout 2020 Hynova may have been somewhat discreet about its activities but as of the beginning of 2021, the performance figures of the company will undoubtedly be echoed far beyond France and Monaco. After a number of unpublicised trials in December, a series of high-profile presentations will be organised between Monaco and Marseille before the whole ‘road show’ takes off to reach the international market and demonstrate the reliability of green hydrogen. Hynova will continue to play a leadership role in carrying its vision and its desire to accelerate the transition to clean energy. Far from wanting to create a monopolistic market, Hynova is most keen to also see fellow manufacturers and competitors alike initiate an ecological shift without delay.

At the outset, Hynova’s ambition was to operate as an ordinary charter service, renting boats on a daily basis. However, the company’s founder remains open to the idea of catering for luxury yachting customers who may see in Hynova the ‘green key’ that will open the doors to unlimited sailing, including boat trips to marine protected areas. The current world policy to protect the ecosystem suggests that this niche clientele could very soon become one of the company’s biggest income generators. With this prospect in mind, Chloé Zaied went all out on questions of ergonomics as well as the ultra-futuristic design of this first project. Fully aware that this demanding clientele is perpetually in search of ever more extravagance, Chloé Zaied is already offering the possibility to see digitalized 3D models of its customised projects on the company’s website. 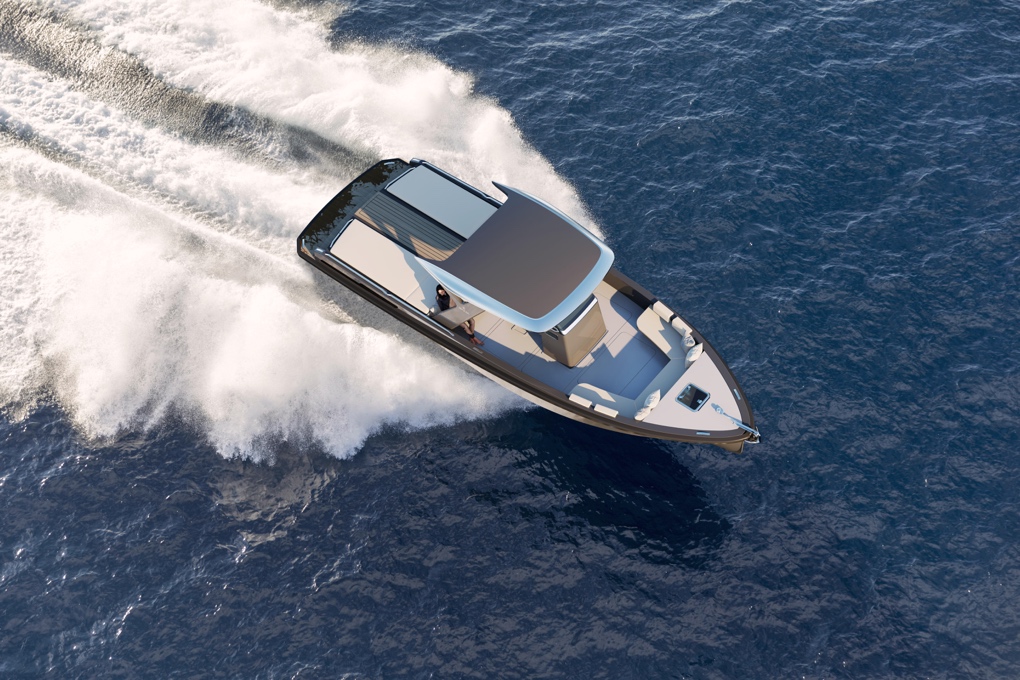 In the year when France launched a €7 billion hydrogen development plan and the European Commission provided funds to the tune of €120 billion, one could reasonably have expected list prices of the pioneer companies in this sector to literally go through the roof. In her capacity as an ambassador for ecological transition, and out of concern for work ethics, Chloé Zaied rapidly put in place a mechanism together with her suppliers, whereby cost escalation would be avoided. This would have harmed or considerably slowed down the implementation of hydrogen propulsion in the leisure cruise sector.

Consequently, irrespective of the inherent cost of this new technology due to implementation measures and engineering patents, Hynova has undertaken to not exceed by more than 30% or 40% the cost of a conventional fuel powered boat of similar weight, length, power and design. This add-on will of course be recouped over time due to the considerable savings in fuel consumption.

Also, one is bound to say that many conventional boats have fuel tanks that are disproportionately large compared to the consumption needs of their users. Where hydrogen propulsion is concerned, Hynova is able to install custom-size hydrogen tanks whose capacities correspond to the actual needs of each user.

With hydrogen, unlike a full battery-powered boat, fuel capacity and power requirement need not be coupled. It is possible to add hydrogen cylinders for more autonomy and a fuel cell for more power.

Chloé Zaied always has an ace up her sleeve and she never fails to let let people know it.

The young and passionate advocate for green energy is already planning to launch negotiations with harbour masters so that they free-up more berths for zero emission vessels, to the detriment of conventional craft with high pollutant emissions.

There is no doubt that many luxury charter passengers would not hesitate to set aside a larger budget for an eco-friendly boat if only to be allocated a berth in a port, and especially if this berth is more conveniently located.

A striking example is the port of Cala del Forte which lies 7.6 nautical miles from Monaco, in the Italian city of Ventimiglia. The existing Hercule and Fontvieille ports in the Principality of Monaco are so fully booked that another solution had to be found. In 2016, the Monegasque government took out an 85 year lease and spent some 80 million euros to build and develop Cala del Forte which can accommodate over 170 vessels, ranging from 6.5 metres to 60 metres.

A MILESTONE OF INNOVATION

Some men of genius such as Isaac Newton, Albert Einstein, Auguste and Louis Lumière, Nikola Tesla and Thomas Edison devoted most of their lives to the accomplishment of their work which all revolutionised the world. But this is not the case when it comes to the technical achievements initiated by Hynova.

Very early on, Chloé Zaied surrounded herself with a highly professional team that was able to bring together competent and caring people and to find investors who had faith in her vision.

It only took one year to build the first model – the Hynova 40 – which is expected to be marketed on a large scale in the next five to ten years.