The project aims to produce green hydrogen using renewable electricity from offshore wind off the coast of Netherlands of about 4 gigawatts by 2030, and 10+ gigawatts by 2040, kickstarting the hydrogen economy in Northwest Europe. 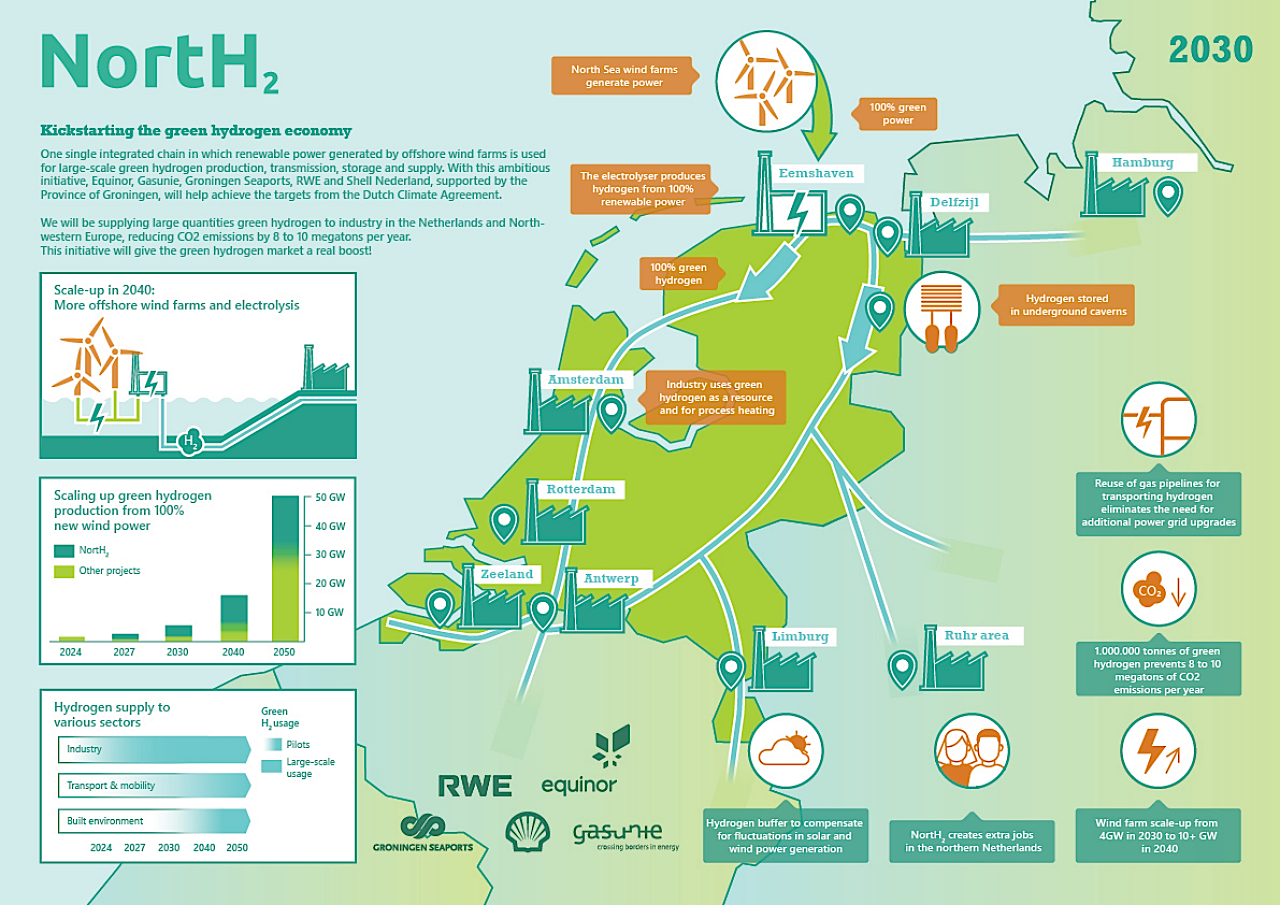 “This is a groundbreaking project that Equinor is looking forward to contribute to. The project can be an important part in our efforts to build a competitive position in hydrogen, creating future value and industrial possibilities. Our aim is to be a net-zero energy company by 2050 and developing a profitable low carbon value chain for hydrogen will be an essential part of our transition to become a broad energy company. Hydrogen will be key to decarbonization and net zero efforts for the energy market, especially in otherwise hard to abate sectors which cannot be served by electricity,” says Equinor CEO, Anders Opedal.

NortH2 was launched in February 2020, with Shell, Groningen Seaports Gasunie and the province of Groningen. Equinor joins RWE as new partners to the project. The project will complete a feasibility study by 2021, with the aim to start project development activities in the second half of 2021.

“NortH2 fits well with Equinor’s experience and position as a leading offshore wind operator. Hydrogen will add to the competitiveness of renewables in the years to come, by adding value and an alternative route to market for renewables. The development of viable large-scale clean hydrogen value chains twill help meet the Paris agreement targets, says Pål Eitrheim, executive vice president New Energy Solutions in Equinor.

Northwest Europe is wellpositioned to develop an integrated hydrogen value chain – from offshore wind development and renewable power generation to production, storage, transport and the sale of green hydrogen.

The North Sea has a great potential for large-scale wind development, there is extensive existing natural gas infrastructure that is suitable for storage and large-scale transport of hydrogen, and there are large industrial clusters in the Netherlands and Germany as well as heavy-duty vehicle OEMs that could economically benefit from a ‘first mover’ advantage.

NortH2 sets a vision for 4 GW integrated offshore-wind-to-green-hydrogen value chain by 2030, and for 10+ GW by 2040. Through the parallel development of the required hydrogen infrastructure by repurposing existing natural gas infrastructure, the project could supply major Northwest European clusters.

By doing so the NortH2 project will make an important domestic contribution to meet expected quickly growing hydrogen demand and thereby to meet Dutch as well as EU climate targets for 2030. It also ensures long term decarbonisation in line with the Paris Agreement. The project fits well with the agenda of the Northern Netherlands to become a leading region for green hydrogen, supporting economic development and the creation of high-skilled jobs.