As one of the last milestones before liftoff at the end of the year, the first Meteosat Third Generation weather satellite is being fitted with its Lightning Imager. From geostationary orbit, 36 000 km above Earth’s surface, this state-of-the-art European instrument will continuously monitor lightning over more than 80% of Earth’s disc for early warnings of dangerous storms. Remarkably, it is capable of imaging relatively weak lightning events in full sunlight.

Following on from the first and second generations of Meteosat satellites, the Meteosat Third Generation (MTG) mission will deliver essential data for weather forecasting from geostationary orbit for the next two decades. The MTG mission comprises two types of satellite: four MTG-Imagers and two MTG-Sounders.

With the first MTG-I, MTG-I1, scheduled for liftoff at the end of the year, it’s full steam ahead to get this new satellite fit and ready for shipping to the launch site at Europe’s Spaceport in French Guiana.

MTG-I1 has already been equipped with one of its instruments, the Flexible Combined Imager, which will deliver a full image of Earth every 10 minutes to monitor and forecast the weather. It can also zoom in to deliver images of selected regions every 2.5 minutes.

Now it’s time for MTG-I1 to be fitted with its other main instrument, the Lightning Imager.

Lightning, which can occur from cloud-to-cloud or cloud-to-ground, is a sure sign of turbulence in the atmosphere and can be used in meteorological modelling as an early indicator of the development of severe weather events. The earlier they can be detected, the better.

The continuous monitoring for lightning by the all-new Lightning Imager will do just this – it will allow for the early detection of severe storms and therefore be key for issuing timely warnings, and it will also be particularly relevant for air traffic safety. Its detectors are so sensitive that relatively weak lightning events can be detected, even when it is full daylight.

The Lightning Imager was developed at Leonardo in Florence, Italy, and has now been delivered to the Thales Alenia Space’s facilities in Cannes, France, where it is being integrated into the MTG-I satellite. 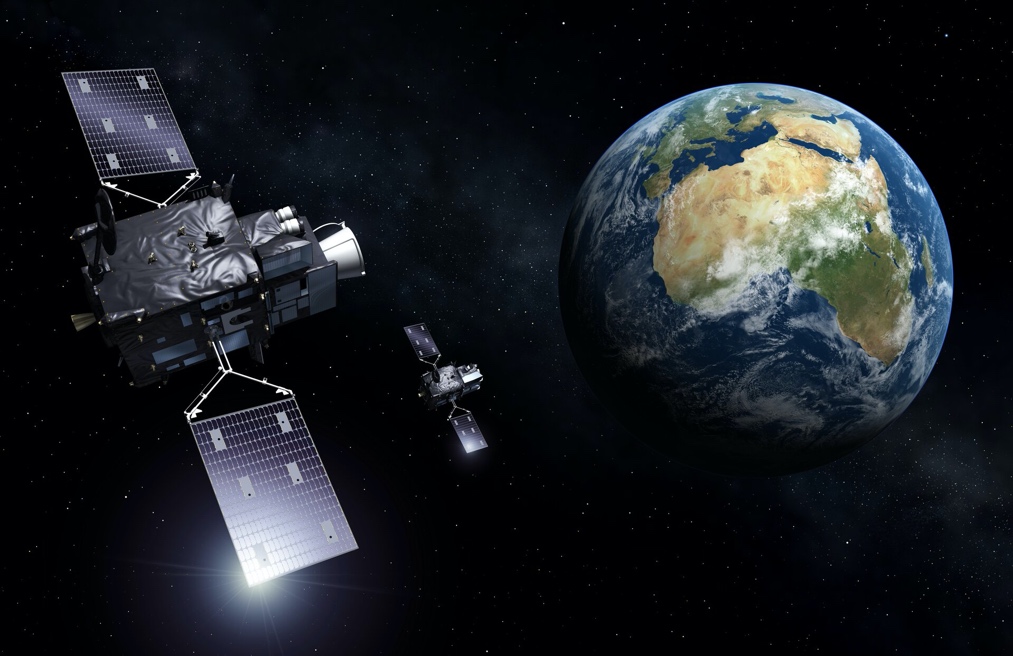 Meteosat Third Generation (MTG) Imaging and Sounding satellites. The system includes four MTG-I imaging (foreground) and two MTG-S sounding satellites. Continuing the long-standing partnership between ESA and the European Organisation for the Exploitation of Meteorological Satellites (Eumetsat), and building on the success of the first two generations of Meteosat satellites, this new family of weather satellites will not only guarantees the continuity of data for weather forecasting from geostationary orbit into the next decades, but will also provide advanced imaging capabilities, all-new infrared sounding and lightning imaging for warnings of severe storms © ESA, CC BY-SA 3.0 IGO

Despite a relatively simple instrument architecture, with no moving parts, the complexity of the Lightning Imager is in the resolution and speed of the detectors, and the subsequent image processing of the data on board, which automatically rejects any data that are not related to lightning.

Paul Blythe, ESA’s Meteosat Programme Manager, explains, “At the heart of the instrument are four optical heads which each have detector arrays of more than 1.2 million pixels. These arrays are sampled every millisecond to measure the energy emitted in their respective fields of view.

“For each of the more than 4.8 million pixels, these signals are then compared to a reference image of Earth to determine if a lightning flash has occurred. With this number of pixels and a sampling rate of 1 millisecond the raw data rate of the instrument is enormous, at several Gbits a second. This is then reduced by over a factor of 250 through clever logic in the front-end electronics followed by advanced signal processing in the state-of-the-art single board computer provided by Thales Alenia Space.

“The net result is an output from the instrument of around 30 Mbit a second, so that only relevant data are transmitted to the ground stations for further analysis.”

This European capability will add to and exceed the capability of the US Global Lightning Monitor, which is carried on the GOES satellites, and has shown significant contribution to the overall nowcasting capability.

What is also interesting is that imagers, which detect rapid and localised energy emissions, could be used for other applications such as potentially tracking meteorite events.