Scientists at Hellisheidi geothermal power plant in Iceland have demonstrated a carbon capture and storage cycle at half the cost of previous estimates. Image © Arni Saeberg, CarbFix

The grant amounts to almost half of the total cost of the project, called Silverstone, which aims at near-zero energy production at the power plant.

The signing took place in Brussels at one of the COP26 side events, where the European Union’s General Director of the Directorate-General for Climate Change, Raffaele Mauro Petriccione announced EU’s support for three projects, all of which aim at carbon neutrality. Edda Sif delivered a speech at a seminar hosted by the European Union on the occasion of the agreements.

Carbfix had already been brought to the attention of COP26 attendants, but Icelandic Prime Minister Katrín Jakobsdóttir paid special attention to the company and its method of permanent carbon sequestration in an address at the opening session of the Glasgow climate conference.

“The goal of the Silverstone project is to build a new treatment plant at the Hellisheidi power station, which will capture almost all of the carbon dioxide and hydrogen sulphide from our power plant’s emissions, which will then be pumped into nearby basalt rock layers for permanent mineralisation with Carbfix technology. With this, ON Power will be at the forefront of green geothermal utilization with uninterrupted production of electricity and heat,” says Berglind Rán Ólafsdóttir, ON Power’s CEO.

Carbfix has been developing technology for the permanent sequestration of carbon dioxide at the Hellisheidi Geothermal Power Plant since 2007 in collaboration with domestic and foreign research institutes. The technology only requires electricity and water, and the operation has an insignificant environmental impact. The technology involves dissolving carbon dioxide in water and pumping it into the basalt bedrock, where natural processes permanently absorb the greenhouse gas through mineralisation. In this way, the carbon dioxide is permanently bound in the rocks deep in the bedrock, thus preventing its impact on the climate. The method can also be used for other gases such as hydrogen sulphide, but that geothermal gas has also been captured from the power plant and mineralised since 2014.

Edda Sif Pind Aradóttir, CEO of Carbfix: “It is a great recognition for a young innovation company like Carbfix to receive such significant support from the Innovation Fund and a sign that carbon disposal with Carbfix technology is both an economical and environmentally friendly climate solution that can have an impact far beyond Iceland.” 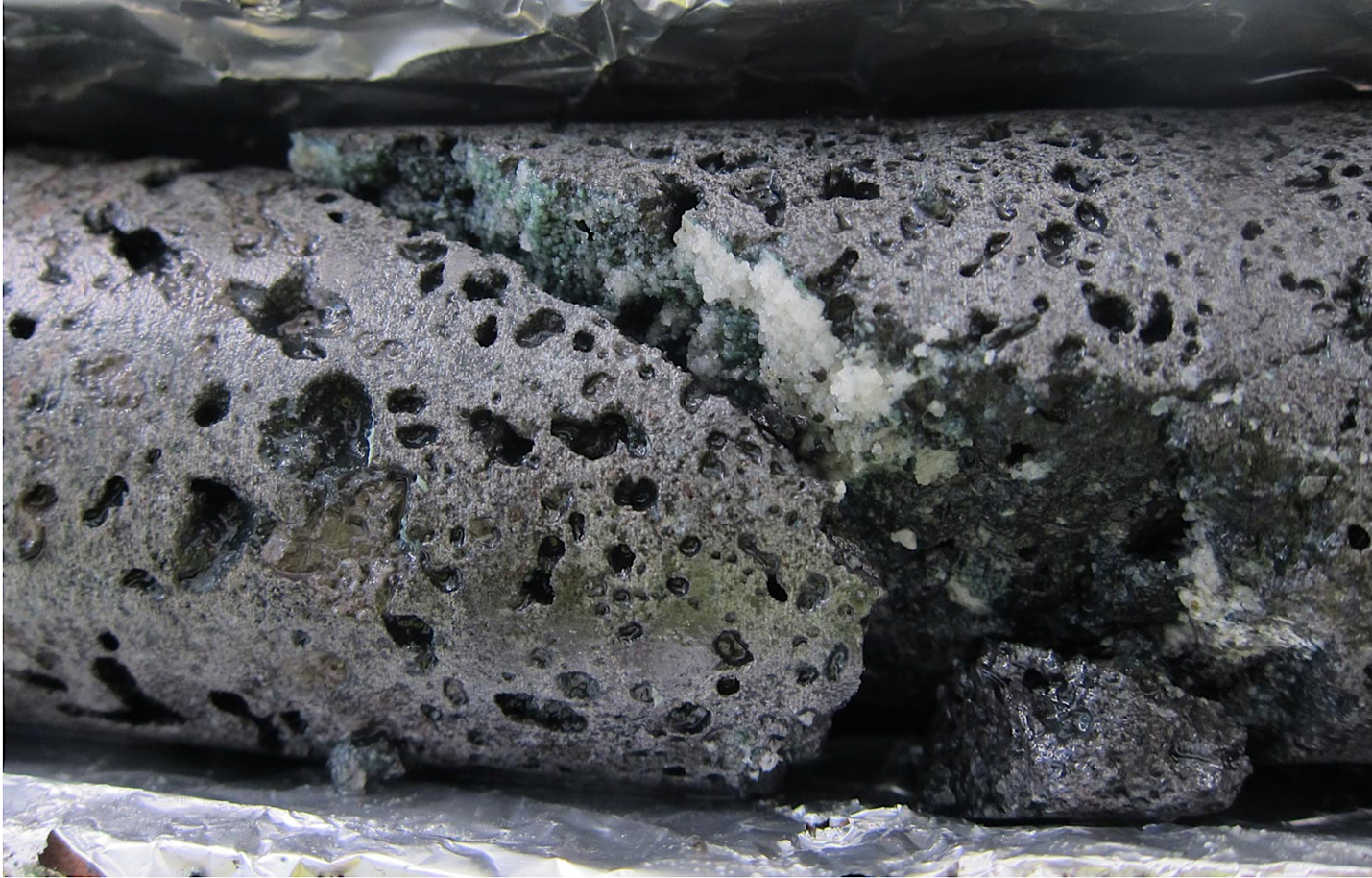 The CarbFix2 project in Iceland injects CO2 in liquid form, rather than as a gas, into porous basaltic rock underground. The CO2 reacts with the rock to form less harmful calcite ©  Sandra O. Snaebjornsdottir, CarbFix

The Carbfix process captures and permanently removes CO2. The technology provides a complete carbon capture and storage solution, where CO2 dissolved in water – a sparkling-water of sorts – is injected into the subsurface where it reacts with favourable rock formations to form solid carbonate minerals via natural processes. Carbfix is a research and innovation driven technology which has, since 2007, been led by
Reykjavik Energy, the University of Iceland and CNRS in Toulouse, as well as several other universities and research institutes. The Carbfix process has been applied to significantly reduce CO2 and H2S emissions from the Hellisheiði Power Plant since 2014, following successful pilot-scale injections in 2012. The technology can be adapted to other carbon emitting industries, such as steel, iron and cement production. Carbfix has been operated as an independent subsidiary of Reykjavík Energy since 2019. It has been proven to be an economic and environmentally friendly solution for the permanent removal of these gases. 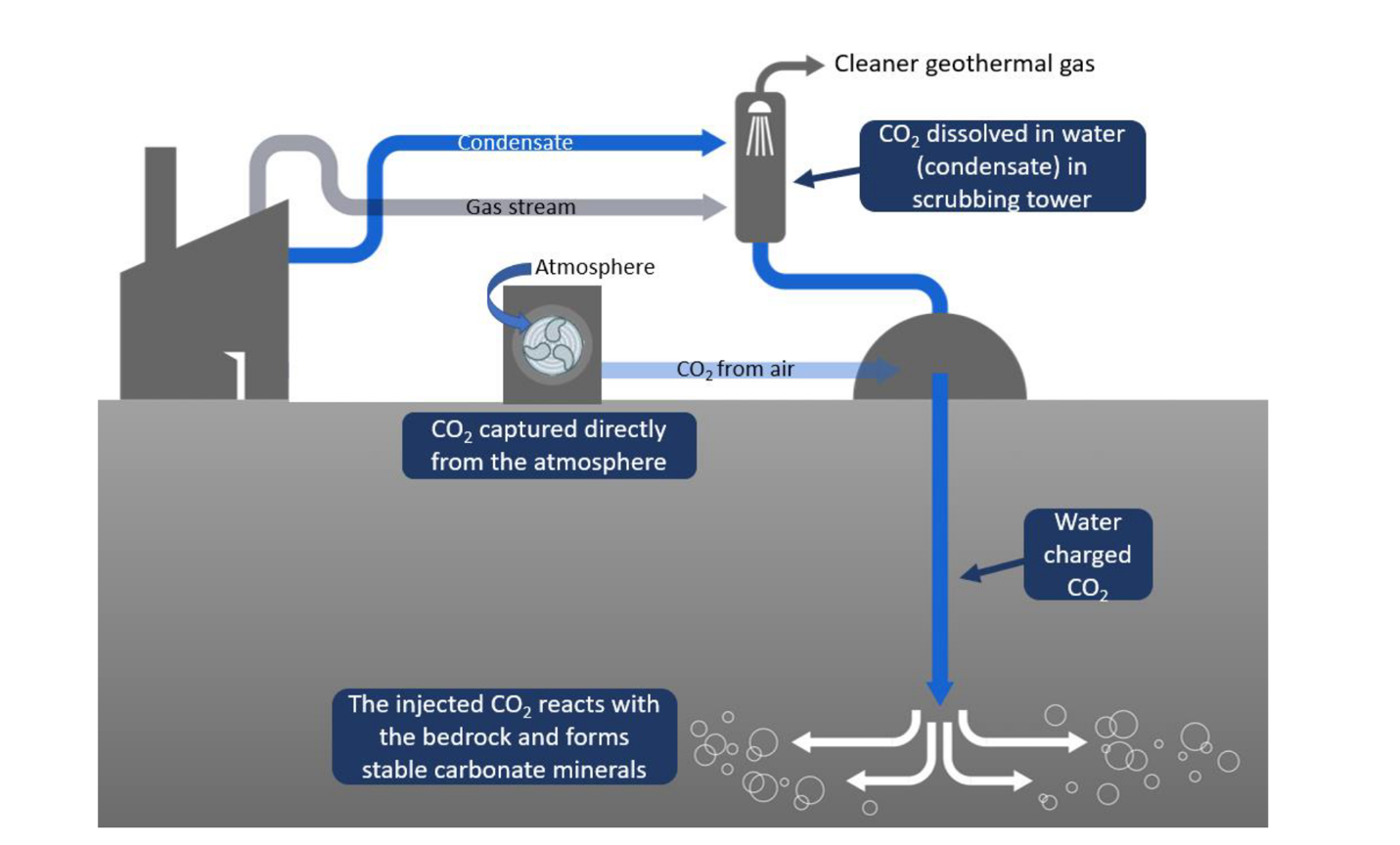 Ongoing activities at the Hellisheidi Geothermal Power Plant where CO2 and H2S are captured
and separated from the other geothermal gases from the plant, dissolved in condensed steam and
injected into the subsurface for permanent mineralisation. CO2 is also captured directly from the
atmosphere in cooperation with the Swiss company Climeworks and co-injected with the other gases © Carbfix

CO2 capture for Carbfix can be carried out via different processes:
• Gases from the Hellisheidi Geothermal Power Plant are captured in a dedicated water scrubbing tower with an annual capacity of about 15,000 tonnes of CO2 and 6,000 tonnes of H2S, about 30% and 75% of the plant’s emissions respectively. The capture capacity at the power plant will be scaled up to reach near zero-emissions in the coming years.

• Direct air capture (DAC). A DAC demonstration plant from the Swiss clean-tech company Climeworks has been operating since 2017 with the capacity to capture about 50 tons of CO2 annually. Preparation for scaling the annual DAC capture up to ~4000 tons of CO2 is underway.

• Carbfix will work in combination with any other CO2 capture technology provided it delivers CO2 in high concentration.

The CO2 is dissolved in water and injected into basaltic formations at >400 m depth where the fluid reacts with the bedrock and forms stable carbonate minerals in less than two years. The injected fluids are monitored in nearby wells and their fate is modelled using state of the art simulation tools. In accordance with a pre-defined traffic-light protocol, preventive steps are followed to minimize risks of induced seismicity. Any induced seismicity that occurs due to injection activities is monitored and analysed. Cost of industrial scale CarbFix operations
at Hellisheidi are less than $25/ton, which is comparable with current price of ETS carbon quota and far cheaper than conventional CCS methods.

Carbfix has received funding from the European Union’s Horizon 2020 research and innovation program.

EUROPEAN INNOVATIONS IN TECHNOLOGY RACER, an aerodynamic configuration at the service of high speed