Frontex took active part in operation 30 Days at Sea, which was globally coordinated by Interpol. As part of the operation aimed at detecting environmental crime, Frontex planes and vessels monitored nearly 1 000 vessels. The operation’s tactical phase included the detection of 1,600 marine pollution offences, often triggering fines and follow-up investigations around the globe.

Thousands of suspects, companies and criminal networks engaged in maritime pollution have been detected and investigated in a global INTERPOL-led operation.

Frontline action followed five months of intelligence collection and analysis, enabling the identification of specific hotspots and suspects behind the criminal, deliberate pollution of the world’s waterways.

Preliminary results from the operation’s tactical phase included the detection of 1,600 marine pollution offences, often triggering fines and follow-up investigations across all continents. These include:

By using INTERPOL’s wide range of databases and analytical capabilities, countries were able to connect pollution crime with other serious offences such as fraud, corruption, tax evasion, money laundering, piracy, and illegal fishing.

With surveillance down, criminals are seizing opportunities
With many enforcement resources being reassigned to tackle the pandemic, criminals have been quick to exploit growing vulnerabilities in environmental security and reduced risk of detection.

Authorities in Indonesia detected 65 oil spills and detained two vessels which tried to evade detection by turning off geolocation systems and concealing their national flags.

A major criminal network trafficking plastic waste between Europe and Asia was exposed, triggering cooperation between authorities from both regions. So far, 22 suspects have been arrested and thousands of tonnes of waste have been prevented from being illegally shipped to Asia, where it would have likely been dumped, contaminating soils and generating considerable marine litter.

Several countries from Europe, Asia and Africa reported illegal shipments of contaminated or mixed metal waste falsely declared as metal scraps. In one case, the Italian Coast Guard seized and prevented 11,000 tonnes of metal scraps mixed with plastic, rubber, mineral oil and other contaminants from being loaded onto bulk carriers headed for Turkey. Namibia, the Philippines and Croatia also reported cases of illegal waste shipments from Europe.

Growing trends included COVID-19 disposable items such as masks and gloves, with 13 cases involving medical waste opened as a result of the operation.

With the value of gold on the rise, agencies across Africa, Central and South America worked to track illegal mining, which often results in devastating contamination due to mercury discharges.

INTERPOL Secretary General Jürgen Stock said: “The threat of pollution crime is constantly evolving, endangering the air we breathe, our water and soil. Although this is the third edition of 30 Days at Sea, it is never the same exercise.

“It is thanks to a global yet agile network that we have seen the number of inspections more than double since the first edition: a clear sign that the international community will not stand for criminal attacks on our environment.”

INTERPOL will assist member countries in their follow-up operations and intelligence analysis with support from its Pollution Crime Working Group.

Europol’s Executive Director Catherine De Bolle said: “Marine pollution is a serious threat, which endangers not only the environment but our health and in the long run our global economy. Criminals do not care about the environment; they do not think of tomorrow, but only of increasing their profits on the back of our society. Consolidated law enforcement efforts such as 30 Days at Sea are critical to tackle these borderless crimes and protect our environmental heritage for generations to come.”

“Environmental crime is one of many criminal activities Frontex targets as part of our mission as the European Border and Coast Guard Agency. This is our contribution to the protection of the environment. I’m proud that, as part of 30 Days at Sea, Frontex aerial and maritime assets monitored nearly 1 000 vessels,” said Frontex Executive Director Fabrice Leggeri.

All three editions of Operation 30 Days at Sea have been carried out with funding from the Norwegian Agency for Development Cooperation (Norad). 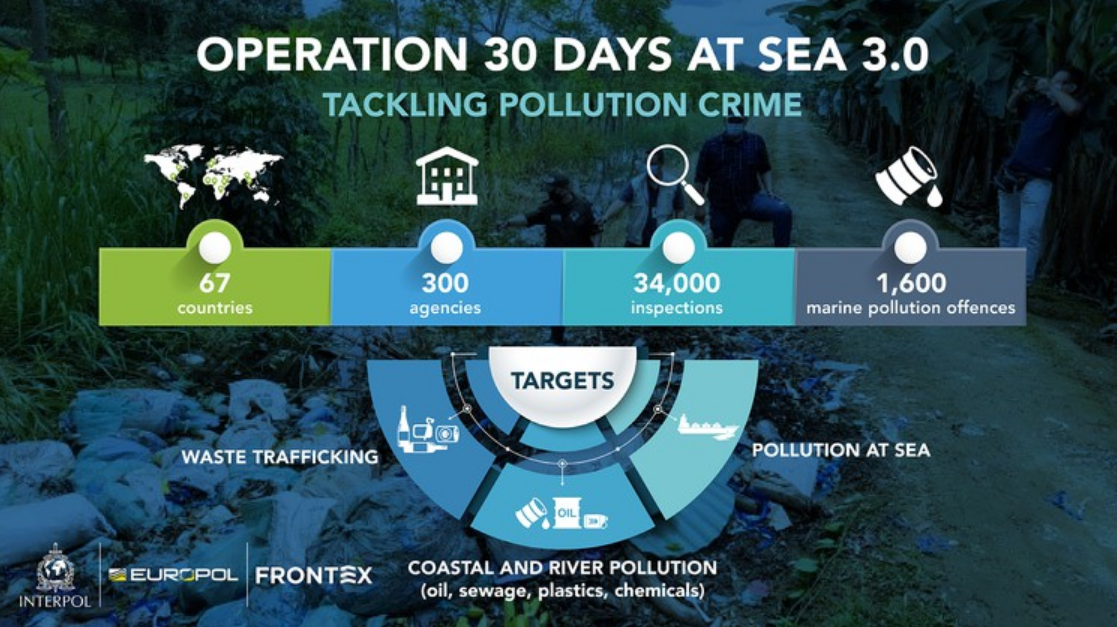 OVER 1.8 MILLION PEOPLE UNDER THE SUPERVISION OF PROBATION AGENCIES IN EUROPE, ACCORDING TO COUNCIL OF EUROPE SURVEY

HERE’S LOOKING AT YOU The spread of face-recognition softwar

THE VALUE OF THE EUROPEAN COURT OF HUMAN RIGHTS