Flags of the OECD Members © OECD

‘Together, we create better policies for better lives’ is the guiding motto of the Organisation for Economic Co-operation and Development (OECD), an international intergovernmental organization aiming to shape global policies in order to promote equal opportunities and enhance prosperity and global cooperation.

OECD practically reformed and continued the ideas of the initial Organization for European Economic Cooperation (OEEC), which saw the light of day in 1948, after the World War II. OEEC had been designed to manage the Marshal Plan in Europe and to acknowledge and develop the European economic interdependence.

Twelve years later, four of the most influential leaders of that time, Dwight D. Eisenhower, Charles de Gaulle, Konrad Adenauer and Harold Macmillan, met in Paris and discussed ways to enhance economic cooperation worldwide. Upon their discussions, on December 14th 1960 in Paris, 20 founding countries signed the convention and OECD was officially created. Among them were the original OEEC members (among them France, Belgium, Germany, Denmark, Austria, Greece, Portugal, UK or Spain) plus US and Canada, extending the membership to non-European states and becoming international. The convention was signed in 1960 and came into effect in September 1961.

Over its 60 years history, the organization has extended further with 18 additional members, who joined at later dates (Australia, Japan, Israel, South Korea and so on). After 1990, a large number of European countries have expressed their wish to become part of the respectable organization. Malta, the countries of the former Visegrad group, the Baltic States have successively joined. There are now voices who argue that all European Union states should be part of it. The OECD assigned a special working group to supervise and plan all future enlargements. In January this year, a wave of new members has been announced, with OECD opening accession talks with six candidates: Argentina, Brazil, Peru, Croatia, Romania and Bulgaria. In March 2014 Russia’s membership negotiations have been paused, as a response to the Annexation of Crimea by the Russian state. The newest OECD member is currently Costa Rica, who officially joined in May 2021.

The organization is now going through an internal reforming, meant to ease the decision making process among members and to raise the global impact of its role and actions. For a member state, being part of OECD is a global recognition of its fully functional market economy and established democracy. It offers prestige, a good international image and enhanced cooperation possibilities with major economic forces as USA, China or Japan but also access to essential information and the chance to help shape the global policies.

‘Today, the global world looks to the OECD for leadership’ (Queen Rania of Jordan).

The member states are generally high-income economies, regarded as developed countries and with a certified high Human Development Index.

OECD new accessions are guided by a set of rules and common values among all its members, defined as ‘like-mindedness’ (recognized strong democracy and functional market economy), ‘significant player’ (acknowledging the size and economic importance of each future member), ‘mutual benefit’ (meaning that the accession decision will be beneficial for all parties involved) and ‘global consideration’ (aimed to establish a much-needed geographical balance between the OECD member distribution). Technically the accession process is quite elaborate, as more than 20 OECD committees must agree upon the accession of a new state to the group.

Over the years the organization contributed to the creation of some relevant agencies and agreements, as the International Energy Agency (in 1974), the Financial Action Task Force on Money Laundering, the European Free Trade Area and European Nuclear Energy Agency.

As declared on their website (www.oecd.org), the organization works ‘to build better policies for better lives, to shape policies that foster prosperity, equality and well-being for all’.

The OECD produces reliable statistics and reports, quoted and used to shape policies for economic growth and social progress. Economic data are collected using a single format for all member states.

‘The OECD plays an important role in sharing information, data and measuring progress on poverty eradication or inequality, and in bringing to the forefront solutions pertinent for the betterment of humanity and children’ (Kailash Satyarthi, Nobel Peace Prize Laureate).

How does OECD work? As stated, ‘consensus is at heart of the OECD approach and decision making’. Member representatives work together in committees and groups to develop strategies, aligned with the directions given by the OECD council, which is chaired by its Secretary General and a deputy. General Mathias Cormann, a former Australian Finance Minister, born in the German speaking part of Belgium, has been appointed as the 6th OECD Secretary General in June 2021, for a five year term. The organization’s headquarters are in Paris, and has four additional regional offices in Berlin, Washington, Mexico City and Tokyo.

With an estimated yearly budget of 386 million $ (2019), funded by its member countries, the OECD is considered a highly reliable reporter of the global economic situation.

Over the last 60 years the organization elaborated more than 450 international standards, releases more than 500 yearly major reports and country surveys and engages with more than 140000 policy makers each year. More than 300 OECD committees meet regularly to analyze the collected data. OECD cooperates with the United Nations (where it is an official observer), World Trade Organisation, G7 and G20 and a few other regional cooperation groups, and it has received, under the Global Leaders platforms, visits from 160 Heads of State and Government. Throughout its existence, it has developed more than 450 International Agreements, Declarations, Recommendations and Decisions, which contributed to enhanced cooperation and coordination between countries. Its standards refer to principles of corporate governance, anti-bribery fight, gender equality, artificial intelligence, tax regulations, export agreements, education, work policies and much more. The results are often quite tangible: 309 million dollars annual savings through Health & Safe testing established standards, 445 million dollars in additional collected tax by promoting the Tax Inspectors without Borders (TIWB) initiative, 14,8 billion Euros of excess VAT revenues, by adopting the VAT International Guidelines, millions of students evaluated through the famous OECD Program for International Student Assessment, worldwide known as PISA, leading to better and more efficient educational methods.

OECD evaluates and reports yearly the tax level for each country and publishes tax templates for good practices recommendations between countries. While traditionally taxes were payed in the country of capital origin, not where the capital was invested, potentially creating unbalance and injustice to weaker economies (often not OECD members), 2021 brought some changes to that. Promoted by the OECD and supported by the new White House Biden administration, a new international tax policy was agreed upon by 130 countries, on July 1st 2021. This new policy will determine every country to pass economic laws which will require that any multinational corporation will have to pay at least 15% income tax in countries where they actually operate, not only where they have their declared headquarters. It is also hoped that this new regulation will end the quite common corporate practice of declaring company base in countries with low taxation rates and in the so-called ‘tax havens’, in order to evade proper taxation. ‘This historic package will ensure that large multinational companies pay their fair share of tax everywhere’ (Mathias Cormann, OECD Secretary-General). Only by this new international taxation plan, OECD hopes to redistribute up to 240 billion dollars in yearly revenues.

The OECD official list of countries, ranked by their GDP per capita, it is considered an important landmark in international economic decisions and relations. The latest available report ranked Luxembourg, Singapore, Ireland and Switzerland on top. The data also show the lending/ borrowing levels, the household spending or the government deficits.

OECD actions are permanently revised, in order to adapt quickly to present realities. Over the past two years, OECD has provided COVID-19 related data and analysis on the pandemic effect on health, economies and society in general.

OECD pledges to continue innovation, support countries in the digitalization era and continue its leading role in supporting tax policies and reform of a global fair and stable tax system. Published in 2020, the Digital Government Index is a ‘first effort to translate OECD Digital Government Policy Framework (DGPG) into a measurement tool to assess the implementation of the OECD recommendations on digital strategies and reforms across OECD members and key partner countries’ (www.OECD.org). It aims to support countries in their decision making process, recognizing the importance of digitalization and the use of digital technologies and data-driven strategies, to be more flexible and quick in reaction and response. 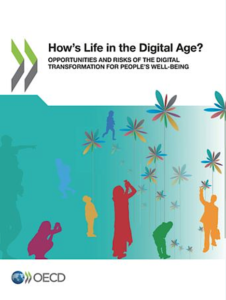 OECD ranks Korea and UK as digital champions, but also mentions lacking relevant information from the USA, Australia and other few member states. However, a list of recommendations followed, stating the importance of creating a data-driven culture in the public sector, of enhancing the use of technology to support and improve government decision process or of maintaining a high level of digital security while protecting privacy.

Another interesting OECD study analyzed the number of online activities used by more than 50% of population. Entitled ‘How’s life in the Digital Age’, it documents how today’s digital realities transform and influence people’s lives, their jobs, income and well-being, but also highlights the risks related to it. The conclusions were that, while digitalization may improve the life of those capable of using it, offering free access to information, it may also lead to deep society division, manipulation through fake news, cyber-banking fraud and bullying, and even cause mental-health serious problems. One of the most interactive OECD statistics is the ‘Better Life Index’, which allows anyone to compare well-being across the world while showing what matters most to people from different countries. OECD has listed eleven aspects of life which are essential to human well-being, from housing, income, job and security to work-life balance, community, education and environment. 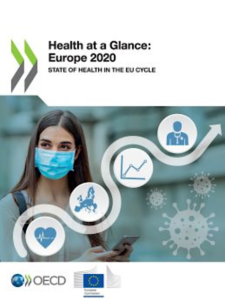 Since its launch in 2011, more than 100.000 users from 180 countries have expressed their preferences on www.oecdbetterlifeindex.org. The responses, grouped by countries, age and gender, are daily updated and reflect the importance that people give to each of the eleven criteria. The responses largely vary but they are an interesting barometer of general interests and how these may shift in time. Cyprus responders gave work-life balance as a top priority (almost 16%), while in Europe the majority of people chose health as being the most important (France, Spain, Norway, Portugal, Italy, Monaco) and also life satisfaction (Germany, Poland, Romania, Ireland). Education, housing and environment were also listed as high priorities in many countries.

OECD member states currently add up to more than 60% of world GDP, 80% of world trade and investment and a large portion of world population. Through its set standards, it helps developing reforms in more than 100 countries, through partnerships, regional programs and development centers.

What’s next? OECD present priorities include finalizing multilateral approach on digital taxation, strengthen the engagement of OECD into the Asia-Pacific region and help post-pandemic economic recovery. As stated by its Secretary-General, the convention aims to be influential and effective in achieving its goals for the rest of the decade. It plans to prioritize climate resilience and the transition to green energy, support countries towards net-zero greenhouse gas emissions and develop policies to help close the gap in well-being between countries.

‘Together we work towards strong, sustainable, green, inclusive and resilient growth’.

EIT TO INVEST € 500 MILLION FOR INNOVATORS ACROSS EUROPE IN 2020