A vast, silent place, timeless and starkly beautiful. Wadi Rum is one of Jordan’s main tourist attractions and one of the most stunning desert landscapes in the world. 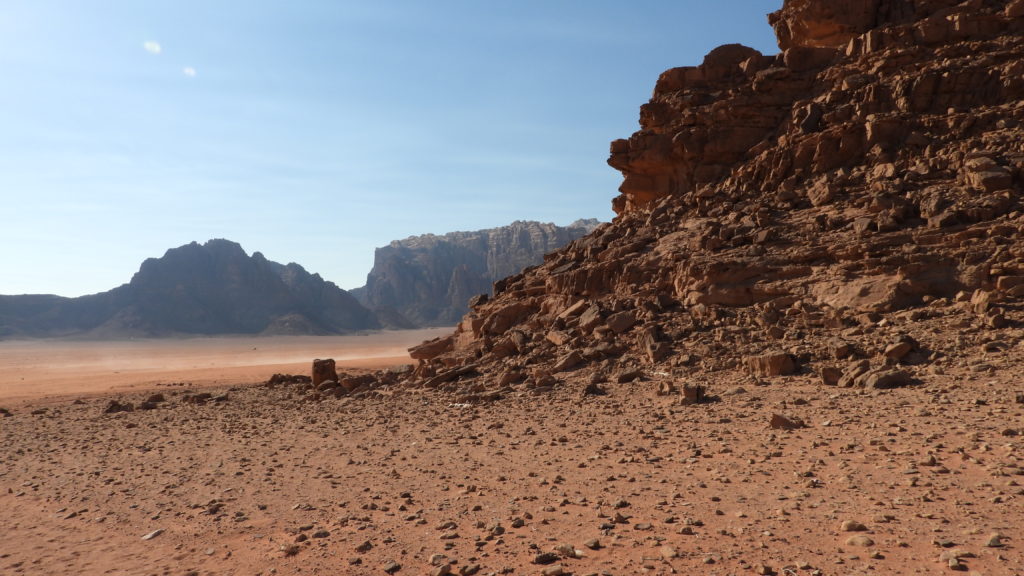 It lies some 320 km southwest of Jordan’s capital Amman, 120 km south of Petra, and just 68 km north of the port city of Aqaba on the Red Sea.

Uniquely shaped massive mountains rise vertically out of the pink desert sand, which separate one dark mass from another in a magnificent desert scenery of strange, breathtaking beauty with towering cliffs of weathered stone..

The faces of the sheer rock cliffs have been eroded by the wind into faces of men, animals and monsters. 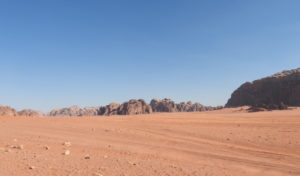 Everywhere in this extraordinary landscape are indications of man’s presence since the earliest known times. Scattered around are flint hand axes, while on the rocks at the feet of the mountains are scratched the names of ancient travelers. The inscriptions of Anfaishiyya reveal a series of etchings depicting camels, warriors, and animals that cover a stretch of the huge rock face.

The ancient Nabatean peoples, who first emerged in the 4th century BC and who inhabited these regions until 106 AD have also left their mark in the form of rock paintings, carvings, water systems in key areas, and of course temples and other architectural marvels, especially around Petra.

But today, all around, there is emptiness and silence…in this immense space, man is dwarfed into insignificance.

The valley floors are some 900-1000 meters above sea level, and the great sandstone crags rise sheer, a further 500-550 meters. Jabal Rum is the highest peak in the area and the second highest in Jordan.

The highest elevation in Jordan is, in fact, Jamal Umm al Dami, culminating at 1,840 metres and located 30 kilometres south of Wadi Rum village. On a clear day, it is possible to see the Red Sea and the Saudi border from its peak. 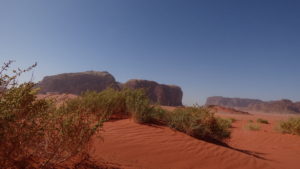 Others are some 27 km north of Wadi Rum village, such as Jabal Kharaz and Jabal Burdah with its Rock Bridge, a spectacular 260-foot-high natural bridge that is truly breathtaking. It is one of Wadi Rum’s most popular attractions.

There are many ways to explore this fragile, unspoiled desert retreat. Serious trekkers will be drawn to Wadi Rum, with challenging climbs some 1750m high, while casual hikers can enjoy an easy course through the colourful hills and canyons.

Naturalists will be drawn to the desert in springtime, when rains bring the greening of the hills and an explosion of 2000 species of wildflowers. Red anemones, poppies and the striking black iris, Jordan’s national flower, all grow by the roadside and in more quiet reaches. Visitors to Wadi Rum usually see very few animals because most desert creatures are nocturnal, to avoid the daytime sun, and many of the larger ones are now reduced to very low numbers. However, if you take the time to look carefully, you are likely to encounter a number of interesting birds, insects and reptiles – and some desert plants. 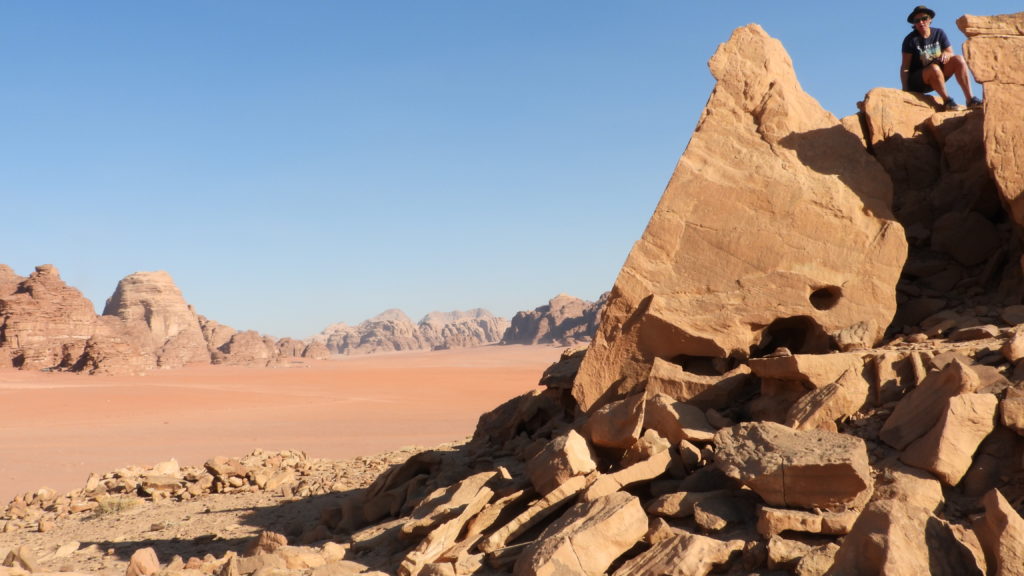 Trees are rare in Wadi Rum and restricted to three types: Acacias, False Figs and Tamarisks. The Acacias, with their flat tops and spiny, sparse branches, are the most typically desert-looking tree. The plants you will see most often are the short, woody shrubs scattered across the desert, which consist of three main species: White Saxaul, Jointed Anabasis and Hammada salicornica. These provide an important food source for Bedouin goats and camels, especially in the summer months, when the smaller succulent desert plants have all dried up. The sparse desert scrub harbors a surprising variety of small birds, of which the most common is the buff colored Desert Lark. Other common but more distinctive birds are the black and white Mourning Wheatear and the White Crowned Black Wheatear, whose name gives away its striking color pattern.

You are also likely to see African Rock Martins wheeling across the scrub and along the cliffs during the summer months, as well as passing flocks of Tristram’s Grackle, showing their orange wing flashes. In early spring and autumn, Wadi Rum becomes an important flyway for birds migrating between Africa and Eastern Europe, especially for birds of prey, like Steppe Buzzards, Honey Buzzards and Steppe Eagles. It is possible to see hundreds of these birds on a single day. Reptiles are widespread in Wadi Rum, but do not exist in high numbers. This may be considered fortunate by some visitors, since there are ten species of snake, of which two are very poisonous vipers: Cerastes gasperttii and Echis coloratus. 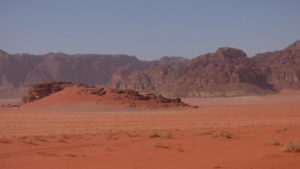 The Cerastes has the classic ‘side-winder’ movement and leaves indented ‘S’ shaped tracks in the sand. It should be stressed, however, that bites from these snakes are extremely rare; the vast majority of visitors never see them. Down on the sand, one common small creature is a black beetle with very long legs called a Blaps beetle. It is frequently seen crossing areas of open sand during the daytime, where it tiptoes to keep its body off the hot ground. Other kinds of invertebrates (insects, spiders and their allies) have different strategies for keeping cool, such as making burrows and hiding under stones.

One group of renowned animals that can be found frequently under stones in Wadi Rum are scorpions. A total of eight kinds have been recorded so far, from large brown ones to small yellow ones. It is the small, yellow ones that give the most painful sting, although like snakes, few visitors see them and very few ever get stung. Stunning in its natural beauty, Wadi Rum epitomizes the romance of the desert. Now the home of several Bedouin tribes, Wadi Rum has been inhabited for generations. These hospitable and friendly desert people are settled in Wadi Rum in scattered nomadic camps throughout the area.

Visitors who are invited to share mint tea or cardamon coffee in their black tents, perhaps sitting by the fire under a starry desert sky, will have an experience not to be forgotten. Wadi Rum is home to the Zalabia Bedouin who have made a success of developing eco-adventure tourism as their main source of income. The area is one of Jordan’s important tourist destinations, and attracts an increasing number of foreign tourists, particularly trekkers and climbers, but also for camel and horse safaris or simply day-trippers from Aqaba or Petra.

Its luxury camping retreats have also spurred more tourism to the area. Popular activities in this desert environment include camping under the stars, riding Arabian horses, hiking and rock-climbing among the massive rock formations. All terrain vehicles (ATVs) and Jeeps, as well as excursions in hot air balloons are also available. 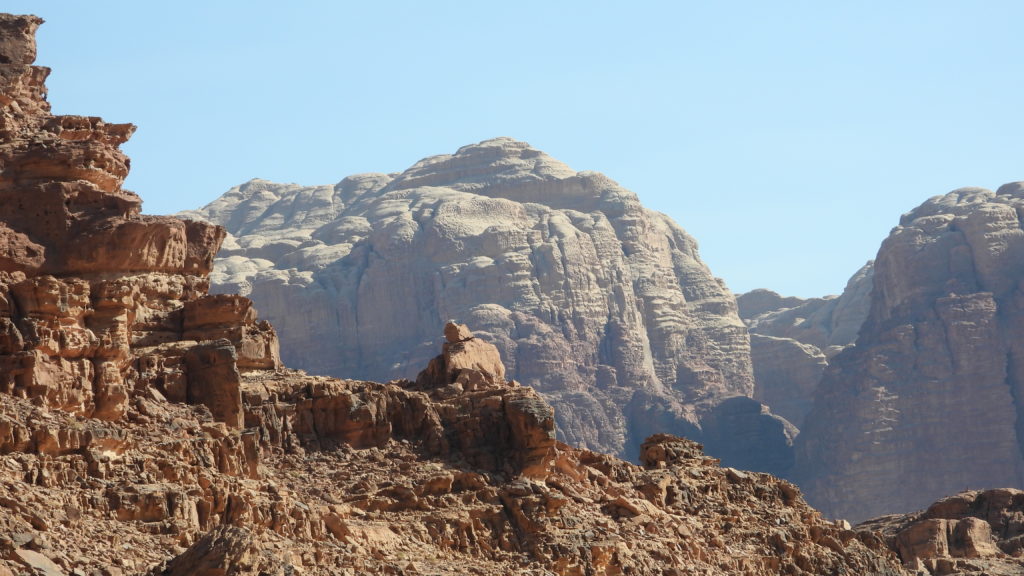 But for the ultimate adventure, there are the Microlight Flights, offered by The Royal Aero Sports Club of Jordan. Experienced ultralight aviation pilots take one passenger at a time for a cruise at speeds of 90 to 100 km/hour at altitudes of 1000 to 1200 metres, which are ideal for photography and filming of the rock formations and sand dunes. Wadi Rum is probably best known because of its connection with the enigmatic British officer T.E. Lawrence, who was based here during the Great Arab Revolt of 1917-18, and as the setting for the film about his exploits in the region, “Lawrence of Arabia”, shot in 1962.

One of the area’s main attractions is the ruins of a house, erected on the Nabatean ruins of a water cistern where, according to legend, “Lawrence of Arabia” lived during the Arab Revolt against the Ottomans.

There is also the Lawrence Spring: Marked by a water tank near the entrance of Wadi Shallalah, this spring is named after T.E. Lawrence who famously made the area his military base and home. The official name of the small spring is Ain Abu Aineh, and views are spectacular from the top. This spring, on the edge of the open sands, is a regular stop on the 4WD circuit. Another important historical aspect of Wadi Rum is on display at the Hejaz Railway desert stop. The refurbished locomotive sitting at this desert station invokes the memory of the century-old conflict that helped shape the modern Middle East.

In 1916, when the world was at war, and much of the Arabic-speaking world was controlled by the Ottoman Turkish Empire, the Allied leadership – Britain, France and Russia – sought to force the Turks out of the region; they urged Hussein bin Ali, Sharif of Mecca, to join them and take up arms against the Ottomans in return for Arab independence. Under the leadership of Hussein’s son, Prince Faisal—and with assistance from the illustrious T.E. Lawrence “of Arabia”—the Arabs fought a guerilla-style war by interrupting train passages on the Hejaz Railway.

In the first three weeks of May 1918 alone, the Arabs destroyed railway tracks on 25 separate occasions. These attacks on transportation systems wreaked havoc on Turkish lines of communication and were instrumental in defeating the Turks and ending the Great War. The origins of the modern Middle East thus trace their way back to the attacks on the trains of the Hejaz Railway. The refurbished steam locomotive at the Hejaz Wadi Rum stop puts that history on display for today’s audiences. Visitors can walk the perimeter of the train and take pictures, or step inside to observe the compartments. On certain occasions, visitors can even pay to board the train and partake in a mock battle during a show put on by the Jordan Heritage Revival Company.

Wadi Rum may be on your travel list for its visual parallels to the arid, crimson landscapes of Mars and the mysterious, barren spaces on the Moon, but a stop at historical attractions such as the desert’s Hejaz Railway station is well worth the time.

Because finding unique, historical gems within famous destinations is often one of the most rewarding parts of travel.

CARTOON OF THE MONTH