Preventing corruption of parliamentarians, judges and prosecutors: France can do better 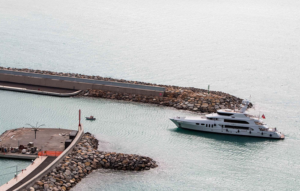 IOn Thursday 15th October at 12.00pm, the iconic sailing yacht Tuiga, flagship of the Yacht Club de Monaco, arrived at Cala del Forte – Ventimiglia from Monaco, the very first to dock at the brand new Molo d’Onore berth. Tuiga was joined soon after by a mighty 50m superyacht that docked nearby only an hour and a half later, followed by three more yachts throughout the afternoon.

As of now, the Cala del Forte waterfront is open. The entry of Tuiga into Cala del Forte marks a historic and symbolic moment in view of the marina’s upcoming official inauguration, scheduled to take place between June and July 2021, once the on-land construction work is completed.

Early bookings will see over 20 yachts docked at Cala del Forte this month, a number that will more than double with 50 yachts overall scheduled to arrive at their reserved berths by the end of the year. In the meantime, the on-land services are starting to take shape as they approach their planned completion date in Spring 2021.

Cala del Forte is currently accepting reservations for berths, available with Daily, Monthly and Seasonal rates. This exquisite, new state-of-the-art marina located in Ventimiglia is only 15 to 20 minutes from the Principality of Monaco (7,9 nautical miles).

Equinor, together with eleven other companies and organisations, has submitted a joint proposal to create a low carbon cluster in the Humber, the UK’s largest and most carbon-intensive industrial region.

The application by the Zero Carbon Humber (ZCH) Partnership is a first step to creating the world’s first net zero industrial cluster by 2040 and will support clean growth in the north-east of England. The bid, announced today, for Phase Two funding from the UK Government’s Industrial Strategy Challenge Fund, builds on a successful application for Phase One funding which was announced in April.

“We are proud to be a leader of Zero Carbon Humber, partnering with a broad group of forward-looking companies. This proposal can bring tremendous benefits to the Humber region, protecting industries, creating jobs, promoting economic growth and reducing emissions. Our bid demonstrates the kind of ambitious action that is needed to for the UK to achieve its net zero carbon target by 2050,” says Al Cook, Equinor executive vice president and UK country manager.

A total of 352 stolen motor vehicles have been seized on their way to their final destination as a result of the Joint Action Day (JAD) ‘Mobile 3’ supported by Europol. A further 1 077 stolen vehicles parts have been confiscated, and dozens of forged or falsified vehicles documents seized.

Some 44 548 checks were carried out against various databases during this two-week long operation (12-23 October 2020) carried out in the framework of the European Multidisciplinary Platform Against Criminal Threats (EMPACT). Led by the European Border and Coast Guard Agency FRONTEX, this operation focused on checks on border crossing points and in-land activities in 17 EU countries and 5 countries in the Balkan region.

In close cooperation with private industry, including the car industry, boats/vessels manufacturers, rental and leasing companies as well as the use of Europol databases, the border control officers at the external EU border prevented many vehicles and boats from being smuggled overseas. As an example the Greek Police seized 15 vehicles from rental companies which criminals attempted to smuggle out from the EU. Activities focused on checks of vehicles and boats resulted also in apprehension of 2 985 illegal migrants on the way to the EU via the land and sea routes. 17 facilitators of migrant smuggling have been located and arrested. The main destination countries of the migrants were Germany and Italy. The facilitators transported the migrants on land routes in trailers, but as well on small boats via the Adriatic Sea. FRONTEX set up a Coordination Centre at its headquarters in Warsaw, where officers from participating countries exchanged operational and intelligence information efficiently. Europol supported remotely by crosschecking in real time the information collected in the field against its databases.

The following countries and parties were involved in the operation MOBILE 3 and linked operations in the same time period:

* This designation is without prejudice to positions on status, and is in line with UNSCR 1244/99 and the ICJ Opinion on the Kosovo declaration of independence.

ANTI-MONEY LAUNDERING: GEORGIA SHOULD INCREASE THE USE OF FINANCIAL INTELLIGENCE

The Council of Europe’s anti-money laundering body MONEYVAL has urged the Georgian authorities to strengthen the practical application of their measures to combat money laundering and financing of terrorism. In a new report it calls for making more efforts to use financial intelligence to detect and investigate money laundering, as well as for strengthening the supervision and regulation focusing on the high-risk non-financial sectors, especially casinos. The report assesses the effectiveness of Georgia’s system for countering money laundering and financing of terrorism system and its level of compliance with Recommendations issued in 2012 by the Financial Action Task Force (FATF).

The report acknowledges that Georgia displays a fair understanding of many of its money laundering and terrorism financing risks. Shortcomings exist regarding identification, in-depth analysis and understanding of some threats, vulnerabilities and risks. Notably, the understanding of risks needs to be developed further in the following areas: use of cash in the economy; the real estate sector; trade-based money laundering and terrorism financing (including in free industrial zones of Georgia); the activities of legal persons; and the use of non-profit organisations (NPOs). 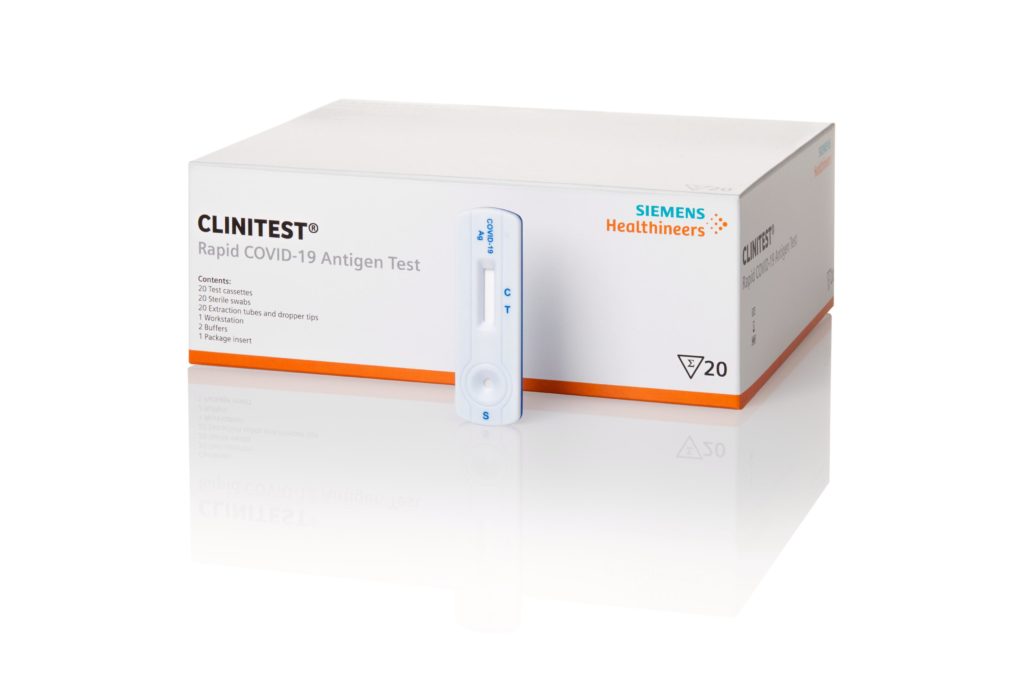 As society continues to navigate through the COVID-19 pandemic, there is a critical public health need to get ahead of the spread with a fast and simple testing for all. To address this need Siemens Healthineers is launching a rapid and easy-to-use antigen test for the detection of SARS-CoV-2, the virus that causes COVID-19. The CLINITEST Rapid COVID-19 Antigen Test1 is a point-of-care cassette test that does not require laboratory instruments or specialized lab personnel to administer, and it delivers results in 15 minutes.

The CE marked test which has been developed and tested by a Siemens Healthineers partner demonstrated 96.72 % sensitivity and 99.22 % specificity based on a clinical study of 317 subjects. The study was performed using operators with varied credentials at six diverse sites including a hospital, a community clinic, a college campus, and an oncology unit. Siemens Healthineers intends to meet such testing demand as the pandemic evolves. There are plans to submit the test for FDA Emergency Use Authorization.

“There is a great public need for reliable tests that can quickly identify contagious individuals and help to minimize the spread of COVID-19, especially in high-traffic areas and where people commonly congregate,” said Christoph Pedain, PhD, Head of Point of Care Diagnostics at Siemens Healthineers. “With quality at the forefront of decision makers’ criteria to determine test reliability, it was critical the clinical study for this test assesses variable clinical conditions that can be expected when implementing a rapid antigen test. This rapid antigen test makes testing available to more people across a wider variety of settings—particularly in locations that need to test people quickly such as airports or that have limited access to laboratory resources such as schools.”

The CLINITEST Rapid COVID-19 Antigen Test is easy to administer for healthcare professionals and delivers results quickly using the nasopharyngeal swab method. Once a sample is collected, the swab is inserted into a tube with special liquid to extract the target molecule. This liquid is then dispensed onto a test cassette and, in 15 minutes, a positive or negative result is clearly indicated.

In its on police detention facilities, the Council of Europe’s European Committee for the Prevention of Torture and Inhuman or Degrading Treatment or Punishment (CPT) stresses that Poland has failed to implement previous recommendations for proper legal and medical access, and that it needs to remedy excessive use of force at the time of apprehension or immediately after apprehension, among other concerns. The CPT reports an “absolute absence” of progress regarding “fundamental safeguards against ill-treatment” as its “deepest concern” following a visit to Poland of its delegation last year, which was the source of its new report. The “ad hoc visit” to Poland included meetings with people in custody in police establishments in Gdańsk, Krakòw, Sopot and Warsaw, as well as with recently arrived remand prisoners at Gdańsk, Krakòw and Warsaw-Służewiec Remand Prisons.

Adopted earlier this year and sent to the Polish authorities in March, the report repeats previous recommendations that Poland develop – “without further delay and in co-operation with the Polish Bar Council” – a fully-fledged and properly funded system of legal aid for persons in police custody who are not in a position to pay for a lawyer, to be applicable from the very outset of police custody. The delegation concludes that legal access remains “highly exceptional, even for juveniles” and that in practice, such access was only made available to the few apprehended persons who were wealthy enough to have their own lawyer and lucky enough to have their lawyer’s name and telephone number with them at the moment of apprehension.

Although those in need are provided medical care (i.e. either the police called an ambulance or took the detained person to a hospital emergency ward), they lack the fundamental right to confidentiality of medical examinations. “Any injuries observed on persons brought to police detention facilities continued to be poorly recorded (if at all) and non-medical police staff had unrestricted access to medical documentation concerning persons in police custody”, according to the report.

The CPT report and the response of the Polish authorities (https://rm.coe.int/1680a024c7) have been made public at the request of the Polish Government.

HUMANKIND, WHAT DOES THE FUTURE HOLD?