In 1580’s England, during the Black Plague a young Latin tutor falls in love with an extraordinary, eccentric young woman in this “exceptional historical novel” (The New Yorker) and best-selling winner of the Women’s Prize for Fiction.
Agnes is a wild creature who walks her family’s land with a falcon on her glove and is known throughout the countryside for her unusual gifts as a healer, understanding plants and potions better than she does people. Once she settles with her husband on Henley Street in Stratford-upon-Avon she becomes a fiercely protective mother and a steadfast, centrifugal force in the life of her young husband, whose career on the London stage is taking off when his beloved young son succumbs to sudden fever.
A luminous portrait of a marriage, a shattering evocation of a family ravaged by grief and loss, and a tender and unforgettable re-imagining of a boy whose life has been all but forgotten, and whose name was given to one of the most celebrated plays of all time, Hamnet is mesmerizing, seductive, impossible to put down—a magnificent leap forward from one of our most gifted novelists.

It is 1914, and the world has been on the brink of war so often, many New Yorkers treat the subject with only passing interest. Eliza Ferriday is thrilled to be traveling to St. Petersburg with Sofya Streshnayva, a cousin of the Romanovs. The two met years ago one summer in Paris and became close confidantes. Now Eliza embarks on the trip of a lifetime, home with Sofya to see the splendors of Russia: the church with the interior covered in jeweled mosaics, the Rembrandts at the tsar’s Winter Palace, the famous ballet.
But when Austria declares war on Serbia and Russia’s imperial dynasty begins to fall, Eliza escapes back to America, while Sofya and her family flee to their country estate. In need of domestic help, they hire the local fortune-teller’s daughter, Varinka, unknowingly bringing intense danger into their household.
On the other side of the Atlantic, Eliza is doing her part to help the White Russian families find safety as they escape the revolution. But when Sofya’s letters suddenly stop coming, she fears the worst for her best friend.
From the turbulent streets of St. Petersburg and aristocratic countryside estates to the avenues of Paris where a society of fallen Russian émigrés live to the mansions of Long Island, the lives of Eliza, Sofya, and Varinka will intersect in profound ways. In her newest powerful tale told through female-driven perspectives, Martha Hall Kelly celebrates the unbreakable bonds of women’s friendship, especially during the darkest days of history. 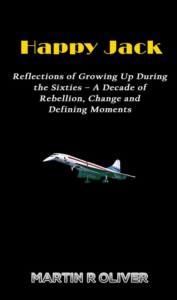 Happy Jack: Reflections of Growing Up During the Sixties – A Decade of Rebellion, Change and Defining Moments are the memories of a young man from a working-class family coming of age during the sixties decade, and the many iconic moments and sometimes humorous events of that period. Over fifty years later, people still talk about the Vietnam War, the moon landing, Woodstock, Monty Python, the music of The Beatles, and The Rolling Stones. James Bond movies continue to be popular to this day. There were the Mods and Rockers, The British Invasion, The Hippies, Pirate Radio, The Civil Rights Movement, Che Guevara, and JFK’s assassination.

The stories portray school, factory, teenage years, family life, and summer holidays, before colour TV was introduced and the internet, email, mobile phones, laptops and gadgets were ever invented. These stories are for the younger generations to understand the decade that became known as “The Swinging Sixties”, and our youth-driven Cultural Revolution, which saw a surge in freedom of expression, a time when working-class youth challenged authority, a time of creativity in fashion, music, photography, art and technology that went on to change the world. The stories are also for those that, like myself, grew up or came of age during that tumultuous time, who will relate to my stories and the challenges of the sixties’ generation.

My observations may not always be correct and, yes, your recollections might not be the same as mine; maybe I didn’t mention Fleetwood Mac, Elvis Presley and some important events that were important to you, but I make no apologies for that. These are my recollections of that time, which I hope will bring some fond memories and nostalgia.

THE DEFINITIVE ACCOUNT OF THE RISE OF THE KINAHAN GANG AND THE DEADLY FEUD THAT HAS SHOCKED THE NATION.

February 2016. A daring gun attack in the Regency Hotel brings Dubliner Christy Kinahan and his international criminal cartel to a horrified public’s attention. Kinahan’s son Daniel, the target of the attack, escapes. A trusted henchman dies at the scene. And the deadly rivalry between the Kinahans and the family and associates of the veteran Dublin gangster Gerry Hutch is now all-out war.

The Cartel offers a unique behind-the-scenes account of how Kinahan got so big, and why a local feud could bring about the unravelling of his global crime empire. Its authors – experienced crime journalists Stephen Breen and Owen Conlon – have written a meticulous, eye-opening and gripping story of double-crossing, vengeance and murder.

SUPER MARIO TO THE RESCUE! – CAN THE FORMER BOSS OF THE EUROPEAN CENTRAL BANK SAVE ITALY

IF YOU PRICK US, DO WE NOT BLEED? – ANTI-SEMITISM CONTINUES TO CONFOUND JUSTICE IN TODAY’S EUROPE