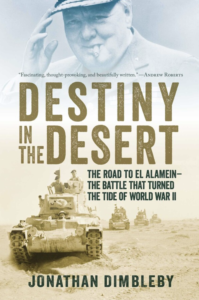 DESTINY IN THE DESERT

THE ROAD TO EL ALAMEIN: THE BATTLE THAT TURNED THE TIDE OF WORLD WAR II

The definitive history of the battle of El Alamein?”The end of the beginning,” as Churchill said?the bloody conflict that would change the course of World War II.

It was the Allied victory at the Battle of El Alamein in November 1942 that inspired one of Churchill’s most famous aphorisms: “This is not the end, it is not even the beginning of the end, but it is, perhaps, the end of the beginning.”
In this thrilling historical account, Jonathan Dimbleby describes the political and strategic realities that lay behind the battle, charting the nail-biting months that led to the victory at El Alamein in November 1942.
Drawing on official records and the personal insights of those involved, Dimbleby creates a vivid portrait of a struggle which for Churchill marked the turn of the tide?and which for the soldiers on the ground involved fighting and dying in a foreign land. 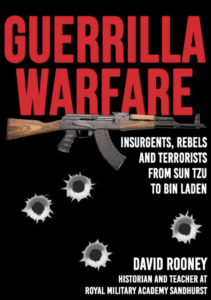 INSURGENTS, REBELS, AND TERRORISTS FROM SUN TZU TO BIN LADEN

The history of the world’s most brutal surprise attacks: guerrilla warfare.

Since man’s earliest days, there has been conflict and, also from that point, unconventional forms of action where the norm was abandoned and the unorthodox employed. Here, historian David Rooney selects examples of the leaders who, for personal, religious, tribal, or national ambitions, have been trailblazers in this form of warfare.
Tracing the origins of guerrilla theories back to the Maccabees, the author moves on through the Napoleonic Age and the Boer Wars before considering Michael Collins, Mao Tse Tung, T. E. Lawrence, Castro and Guevara, and the Guerrillas of World War II before considering the situation with Al Qaeda and Osama Bin Laden. The irregularity of this form of military action seems so pertinent in an age where convention and tradition in all walks of life is quickly abandoned in search of fast results; the warrior of the twenty-first century is more likely to adopt unconventional strategies than ever before. The topic is one of public debate and this explanation of its evolution can only increase our understanding and awareness of the topic. 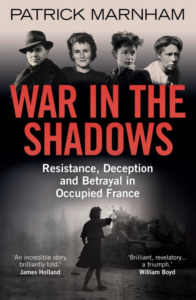 WAR IN THE SHADOWS

After publishing an acclaimed biography of Jean Moulin, leader of the French Resistance, Patrick Marnham received an anonymous letter from a person who claimed to have worked for British Intelligence during the war. The ex-spy praised his book but insisted that he had missed the real ‘treasure’. The letter drew Marnham back to the early 1960s when he had been taught French by a mercurial woman – a former Resistance leader, whose SOE network was broken on the same day that Moulin was captured and who endured eighteen months in Ravensbrück concentration camp. Could these two events have been connected? His anonymous correspondent offered a tantalising set of clues that seemed to implicate Churchill and British Intelligence in the catastrophe.
Drawing on a deep knowledge of France and original research in British and French archives, War in the Shadows exposes the ruthless double-dealing of the Allied intelligence services and the Gestapo through one of the darkest periods of the Second World War. It is a story worthy of Le Carré, but with this difference – it is not fiction. 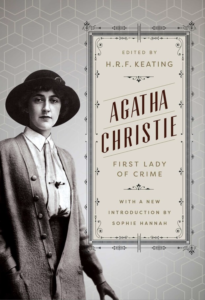 From Poirot to Miss Marple, from The Mousetrap to Witness for the Prosecution, this a fascinating look at the life and work of Agatha Christie, the world’s most successful and popular crime writer.

Agatha Christie was not only the most successful author of detective stories the world has ever known, she was also a mystery in herself, giving only the rarest interviews—declining absolutely to become any sort of public figure—and a mystery, too, in the manner in which she achieved her astonishing success.
Distinguished crime novelist (and acclaimed critic) H. R. F. Keating brings together a dozen noted writers from both sides of the Atlantic to throw light on the ever-intriguing Dame Agatha. Some essays analyze Christie’s art itself; some explain the reasons for her success—not just the books, but also in film and theatre.
The myriad of critical angles explored here are penetrating, affectionate, enthusiastic, analytical, and even funny. Together, they give an almost unique insight into the life and work of the First Lady of Crime. 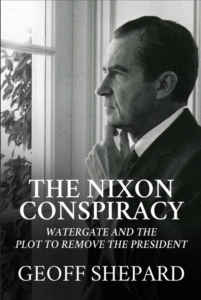 WATERGATE AND THE PLOT TO REMOVE THE PRESIDENT

Geoff Shepard had a ringside seat to the unfolding Watergate debacle. As the youngest lawyer on Richard Nixon’s staff, he personally transcribed the Oval Office tape in which Nixon appeared to authorize getting the CIA to interfere with the ongoing FBI investigation, and even coined the phrase “the smoking gun.” Like many others, the idealistic Shepard was deeply disappointed in the president. But as time went on, the meticulous lawyer was nagged by the persistent sense that something wasn’t right with the case against Nixon.
The Nixon Conspiracy is a detailed and definitive account of the Watergate prosecutors’ internal documents uncovered after years of painstaking research in previously sealed archives. Shepard reveals the untold story of how a flawed but honorable president was needlessly brought down by a corrupt, deep state, big media alliance—a circumstance that looks all too familiar today. In this hard-hitting exposé, Shepard reveals the real smoking gun: the prosecutors’ secret, but erroneous, “Road Map” which caused grand jurors to name Nixon a co-conspirator in the Watergate cover-up and the House Judiciary Committee to adopt its primary Article of Impeachment.
Shepard’s startling conclusion is that Nixon didn’t actually have to resign. The proof of his good faith is right there on the tapes. Instead, he should have taken his case to a Senate impeachment trial—where, if everything we know now had come out—he would easily have won.

TO VISIT – Drawings for Versailles 20 years of acquisitions