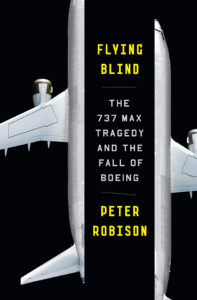 THE 737 MAX TRAGEDY AND THE FALL OF BOEING

NEW YORK TIMES BUSINESS BEST SELLER • A suspenseful behind-the-scenes look at the dysfunction that contributed to one of the worst tragedies in modern aviation: the 2018 and 2019 crashes of the Boeing 737 MAX. An “authoritative, gripping and finely detailed narrative that charts the decline of one of the great American companies” (New York Times Book Review), from the award-winning reporter for Bloomberg.

Boeing is a century-old titan of industry. It played a major role in the early days of commercial flight, World War II bombing missions, and moon landings. The planemaker remains a cornerstone of the U.S. economy, as well as a linchpin in the awesome routine of modern air travel. But in 2018 and 2019, two crashes of the Boeing 737 MAX 8 killed 346 people. The crashes exposed a shocking pattern of malfeasance, leading to the biggest crisis in the company’s history—and one of the costliest corporate scandals ever. How did things go so horribly wrong at Boeing? Flying Blind is the definitive exposé of the disasters that transfixed the world. Drawing from exclusive interviews with current and former employees of Boeing and the FAA; industry executives and analysts; and family members of the victims, it reveals how a broken corporate culture paved the way for catastrophe. It shows how in the race to beat the competition and reward top executives, Boeing skimped on testing, pressured employees to meet unrealistic deadlines, and convinced regulators to put planes into service without properly equipping them or their pilots for flight. It examines how the company, once a treasured American innovator, became obsessed with the bottom line, putting shareholders over customers, employees, and communities. By Bloomberg investigative journalist Peter Robison, who covered Boeing as a beat reporter during the company’s fateful merger with McDonnell Douglas in the late ‘90s, this is the story of a business gone wildly off course. At once riveting and disturbing, it shows how an iconic company fell prey to a win-at-all-costs mentality, threatening an industry and endangering countless lives.

THE EXALTED LIFE AND MYSTERIOUS DEATH OF A NAZI FUGITIVE

A tale of Nazi lives, mass murder, love, Cold War espionage, a mysterious death in the Vatican, and the Nazi escape route to Perón’s Argentina,”the Ratline”—from the author of the internationally acclaimed, award-winning East West Street.

Baron Otto von Wächter, a lawyer, husband, and father, was also a senior SS officer and war criminal, indicted for the murder of more than a hundred thousand Poles and Jews. Although he was given a new identity and life via “the Ratline” to Argentina, the escape route taken by thousands of other Nazis, Wächter and his plan were cut short by his mysterious, shocking death in Rome. In the midst of the burgeoning Cold War, was he being recruited by the Americans or by the Soviets—or perhaps both? Or was he poisoned by one side or the other, as his son believes—or by both? With the cooperation of Wächter’s son Horst, who believes his father to have been “a good man,” award-winning author Philippe Sands draws on a trove of family correspondence to piece together Wächter’s extraordinary life before and during the war, his years evading justice, and his sudden, puzzling death. A riveting work of history, The Ratline is part historical detective story, part love story, part family memoir, and part Cold War espionage thriller.

A revelatory history of one of Stalin’s greatest crimes, the consequences of which still resonate today, as Russia has placed Ukrainian independence in its sights once more—from the author of the Pulitzer Prize-winning Gulag and the National Book Award finalist Iron Curtain.

“With searing clarity, Red Famine demonstrates the horrific consequences of a campaign to eradicate ‘backwardness’ when undertaken by a regime in a state of war with its own people.” The Economist

In 1929 Stalin launched his policy of agricultural collectivization—in effect a second Russian revolution—which forced millions of peasants off their land and onto collective farms. The result was a catastrophic famine, the most lethal in European history. At least five million people died between 1931 and 1933 in the USSR. But instead of sending relief the Soviet state made use of the catastrophe to rid itself of a political problem. In Red Famine, Anne Applebaum argues that more than three million of those dead were Ukrainians who perished not because they were accidental victims of a bad policy but because the state deliberately set out to kill them. Devastating and definitive, Red Famine captures the horror of ordinary people struggling to survive extraordinary evil. Applebaum’s compulsively readable narrative recalls one of the worst crimes of the twentieth century, and shows how it may foreshadow a new threat to the political order in the twenty-first.

WE UYGHURS HAVE NO SAY

The words of China’s most famous political prisoner

In Xinjiang, the large northwest region of China, the government has imprisoned more than a million Uyghurs in reeducation camps. One of the incarcerated—whose sentence, unlike most others, has no end date—is Ilham Tohti, an intellectual and economist, a prolific writer, and formerly the host of a website, Uyghur Online. In 2014, Tohti was arrested; accused of advocating separatism, violence, and the overthrow of the Chinese government; subjected to a two-day trial; and sentenced to life. Nothing has been heard from him since. Here are Tohti’s own words, a collection of his plain-spoken calls for justice, scholarly explanations of the history of Xinjiang, and poignant personal reflections. While his courage and outspokenness about the plight of China’s Muslim minorities is extraordinary, these essays sound a measured insistence on peace and just treatment for the Uyghurs. Winner of the PEN/Goldsmith Freedom to Write Award and the Sakharov Prize for Freedom of Thought while imprisoned, this book is the only way to hear from a man who has been called “a Uyghur Mandela.” Praise:“Ilham Tohti is the world’s foremost expert on Uyghurs and Chinese policy in Xinjiang, and we are extremely fortunate to have the first collection of his writings and interviews in English. These texts provide a politically illuminating introduction to the many dimensions of Uyghur oppression. This is an absolute must-read for anyone trying to understand the origins of one of the 21st century’s great human catastrophes.”
– Eli Friedman, Cornell University, author of The Urbanization of People: The Politics of Development, Labor Markets, and Schooling in the Chinese City. “Ilham Tohti should be read not only as a tragic victim of state violence, but as a primary source for understanding the underlying conditions at the heart of the Xinjiang emergency. With the skill of a diplomat balancing on the knife-edge of a capricious state, We Uyghurs Have No Say calls all people of conscience to stand in opposition to Islamophobia and against an emergent settler colonialism at a frontier of our shared global economy.”