A new way of imaging concealed objects, devised by a researcher at the National Institute of Standards and Technology (NIST) and his colleagues, might take all the fun out of hide-and-seek, but could also help save lives.

Imaging scenes that lie outside an observer’s direct line of sight could greatly enhance search and rescue missions, such as finding a lost child in an abandoned factory, as well as military and police surveillance operations, such as exposing a hidden terrorist or enemy stronghold. The ability to see around corners and reconstruct a full image of a hidden object or obstacle in real time also could someday improve robotic vision and the safety and accuracy of self-driving cars. (At present, the prototype method cannot create an image instantaneously.)

Most conventional methods used to image objects behind an obstruction use an external source of light — ultra-short pulses of visible or infrared laser light, for example. The light source initially illuminates a wall that scatters the light into the concealed region. When the light strikes a hidden object, the object re-scatters some of the light back to the wall where it can be detected. 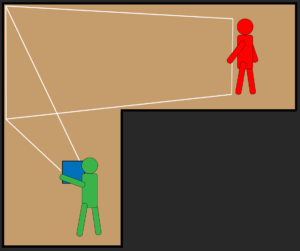 Even though the figure in red lies hidden, out of the direct line of sight of the figure in green, radiation naturally emitted by the concealed figure at submillimeter wavelengths betrays its presence. At these long wavelengths, many types of walls act as partial mirrors, reflecting the light into view of the green figure © Nist

However, imaging hidden objects using only visible and infrared light is challenging. At those relatively short wavelengths, a typical wall — no matter how smooth to the human touch — presents itself as a rough surface and scatters incoming light in all directions. It therefore reveals less information about objects than light reflected from a smooth or mirrored surface and requires sophisticated algorithms and significant computing time to create even a semi-sharp image. In addition, the illumination could tip off adversaries that they are under surveillance.

Other methods, which don’t require a light source, analyze shadows cast by a hidden object on a wall, or detect the heat (infrared radiation) naturally emitted by the concealed body and scattered diffusely into view. But these approaches also require extensive computing time and analysis. “A good algorithm and lots of computer power might extract an image, but not a very good one,” said NIST physicist Erich Grossman.

Grossman and his colleagues based their new approach on detecting the tiny amounts of much longer wavelength radiation — the “submillimeter” range of the spectrum of light that lies just beyond microwave radiation and which people and objects also naturally emit. At these long, invisible wavelengths, ranging from 300 micrometers up to 1 millimeter, walls made of a variety of materials appear relatively smooth and act as partial mirrors, reflecting rather than diffusely scattering into view radiation from a concealed object.

To create an image, the reflected radiation has to be directed and focused. Unlike visible light, submillimeter radiation can’t be steered by glass lenses. Instead, Grossman and his colleagues relied on curved mirrors to focus the invisible light. 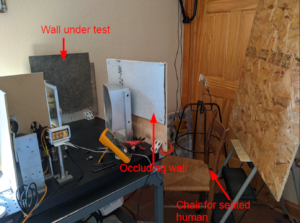 The setup for the experiment at Erich Grossman’s home, where the hidden object (Grossman himself) sat just behind an occluding, or concealing, wall, out of direct view of detectors. “Wall under test” connotes the various types of walls, including ceramic tile and plywood, that the team examined to determine which were best at reflecting submillimeter radiation © E. Grossman/NIST

Experimenting with their prototype, Grossman and his collaborators at the University of Minnesota Twin Cities in Minneapolis demonstrated that they could construct images of objects hidden behind walls in about 20 minutes.

The prototype technique employs state-of-the-art indium phosphide transistors, which amplify submillimeter radiation with little noise over a wide range of wavelengths. The method does not require complex algorithms or intensive computer analysis. “What’s cool about this method is its simplicity,” Grossman said. “There’s no quantum mechanics, no relativity, there’s nothing cryogenic or anything fancy — just transistors and a basic computer and mirrors,” he added. The entire apparatus is small enough to fit in a backpack.

With NIST facilities closed during the peak of the COVID-19 pandemic, Grossman used his own home — converting the bedroom of his daughter, who had left for college, into a makeshift laboratory. Grossman himself was the body hidden behind a wall.

He tested walls made of a range of common indoor building materials to determine which ones reflected enough submillimeter radiation to form an image, including wet and dry wallboard, plywood, wood paneling, unpainted cinderblock and stone kitchen tiles. Walls that reflected at least 5% of the submillimeter radiation were best at producing images of concealed bodies. These included dry wallboard, wood paneling, vinyl floor planking, plywood, stone kitchen tiles and medium-density fiberboard.

With a larger array of detectors and transistors, Grossman said that the method should be able to image hidden objects in real time.

The work was supported by NIST and the Defense Advanced Research Projects Agency (DARPA).