All over the world, the EU is working to prevent and resolve conflicts, support resilient democracies, promote human rights and sustainable development, combat climate change and contribute to a rules-based global order.

As a key player on the world stage, the European Union has consolidated its image and political weight on the international stage by actively engaging in multilateral global aspects and issues. All these coordinated actions have been managed and supported by the European External Action Service (EEAS) over the past 11 years.

The European External Action Service, which was officially launched on 1 January 2011, was formally created by the Lisbon Treaty in 2007 and entered into force at the end of 2009. Although the importance of such an institution was clear to all parties, its creation was the result of long negotiations and discussions about its day-to-day function, the composition of its staff and the involvement of other European institutions. But despite some

disagreements, it was clear to all that the EU must speak loud and clear with one voice to the rest of the world.

The European External Action Service is basically the EU’s diplomatic service, responsible for the EU’s external action, including foreign policy, defence and security, trade, development cooperation and humanitarian aid. Its aim is to make the EU’s foreign policy more influential, coherent and effective.

The security of the European Union, human rights, the fight against climate change, migration and humanitarian aid, gender equality or EU enlargements are just some of the issues that are also on the agenda of the EEAS. In the meantime, the EEAS has developed and improved effective tools to prevent, deter and respond to the “manipulation and interference of foreign information” that has increased in recent years.

From its headquarters in Brussels, the EEAS cooperates with the European Commission on many issues. The EU maintains diplomatic relations with almost every country in the world and cooperates with strategic partners and key international actors.
The work of the EEAS is currently supported by more than 5,000 staff, plus some interns, junior and external staff.

The High Representative of the Union for Foreign Affairs and Security Policy is the main coordinator and representative of the Common Foreign and Security Policy within the European Union. The unofficial title ‘EU Minister for Foreign Affairs’ is sometimes used by the media to make him or her more recognisable to the general public. The High Representative is elected by qualified majority in the European Council for a five-year term. The President of the EU Commission must also agree with this decision.

The first person to hold the full title of Union for Foreign Affairs and Security Policy after the Lisbon Treaty was the Briton Catherine Ashton. Five years later, she was followed by the Italian Federica Mogherini. Currently, the post is held by Josep Borrell Fontelles, a Spanish politician, aeronautical engineer, economist and mathematics professor. He entered politics in the 1970s, held several high-level government posts, including Minister of Foreign Affairs, and was elected High Representative in December 2019.

Since the entry into force of the Lisbon Treaty, the High Representative (HR /VP) is also Vice-President of the European Commission. His or her role is to shape EU action on the global stage while building consensus among EU member states and their respective priorities. The HR participates in the regular meetings of the EU Heads of State and Government in the European Council, informs the European Parliament on foreign and security policy issues, represents the EU in international meetings and is also the head of the European Defence Agency and the EU Institute for Security Studies. The HR /VP regularly reports to MEPs on foreign policy and its activities and answers their questions. In addition, the HR /VP chairs the monthly meetings with all EU Commissioners whose portfolios deal with international issues.

Within the EEAS, the High Representative is responsible for the institution’s annual budget (which must also be approved by the EU Parliament and the Council).

The High Representative also controls EEAS staff and the recruitment policy needed to support the EU’s extensive diplomatic network abroad and operations in the field. In recent years, there has been criticism of the gender imbalance in the European External Action Service. One report found that 87 per cent of senior and 75 per cent of middle management positions in the EEAS are held by men, which is far more than in other EU institutions.

However, the EEAS Human Resources Report 2020 affirmed that “gender equality remains a priority objective of the EEAS and gender balance is being actively pursued with concrete measures”. EEAS staff are recruited on the basis of merit. The EEAS strives to ensure a significant presence of nationals from all Member States in the service and a gender balance. One of the main priorities is to encourage Member States to nominate female candidates for all posts in the EEAS, including senior management positions. As a result of our efforts, the number of staff from these Member States increased by 6% at the end of 2020 compared to the previous year. Moreover, their share of EEAS staff was almost equal to their share of the total EU population. To make it easier for women to fill posts in delegations, the EEAS is also working with Member States on an action plan to improve employment opportunities for spouses in the post.

In an attempt to create a stronger and more competitive common European diplomatic body, the European External Action Service is now launching a pilot project aimed at establishing a European Diplomacy Academy.

42 junior European diplomats from different EU member states, Ukraine (with two diplomats), Georgia, Moldova, Turkey and the Western Balkans (selected by the sending states/institutions) have been selected to participate in a 9-month training programme.

The programme is residential so that participants can live, learn and work together throughout the academic year, which contributes to networking and team building.

In a more difficult world with complex crises, the EU must have a stronger diplomatic voice. We need more well-trained diplomats ready to contribute to world politics. We are establishing the European Diplomatic Academy with the aim of creating a truly European diplomatic corps that will further strengthen our European global action,” said Josep Borrell, EU High Representative for Foreign Affairs and Security Policy, when officially announcing the initiative.

The programme, which will span two academic semesters (September – December 2022 / January – May 2023), already started on 29 August 2022 at the College of Europe campus in Poland with an initial two-week team-building session and visits to the Polish-Ukrainian and Polish-Belarusian borders. Further training on EU foreign and security policy will take place at the College of Europe in Bruges, in the heart of Europe. The programme includes regular study visits to the European institutions in Brussels as well as to other relevant institutions such as NATO.

The stated aim of the programme is to provide participants with skills and competences to effectively promote and defend the principles and interests of the EU in the world. The programme focuses on 10 learning areas and includes group work, simulations and case studies, written and oral presentations, classroom discussions and debates. Around 80% of the lecturers will be EU practitioners, including senior EEAS officials. 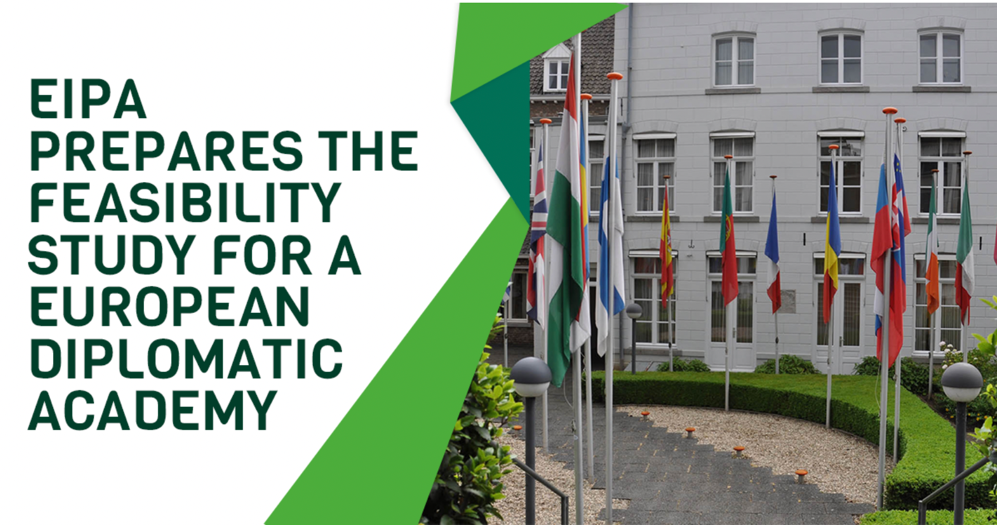 The pilot project, funded by the European Parliament with a budget of €990,000, consists of two steps: an academic pilot programme (currently being developed) and a feasibility study, prepared by the European Institute of Public Administration (EIPA), the European University Institute (EUI) and the Centre for European Policy Studies (CEPS), to be presented in November.

The feasibility study will analyse the different diplomatic trainings that currently exist at national level in the EU and then present different options and also budget estimates for the establishment of a future European Diplomatic Academy. The results and conclusions of the feasibility study and the academic pilot programme will help the EEAS to define the most effective model for this European Diplomatic Academy, in terms of curricula, legal and administrative structure and budgetary needs.

For the pilot year, the EEAS will cover the tuition fees for the entire program, as well as a scholarship for each participant to support transport, boarding and house expenses.

“A European Diplomatic Academy will help train European diplomats and equip them with the knowledge and skills needed to shape common policies, implement common decisions and use the EU institutions to promote and defend the EU’s values and interests in the world”. (EEAS)

The programme, launched only last month, is designed to complement, not replace or duplicate, the curricula of diplomatic academies in EU Member States, which is done at national level, as it will focus mainly on providing the knowledge and skills necessary to conduct European diplomacy at a high level and to represent and promote the European agenda and European diplomatic culture in the world.

Furthermore, learning together in an established environment will create a sense of belonging and cooperation between future European diplomats. However, it is important to note that completing the European Diplomatic Academy pilot programme does not automatically guarantee a job in the EEAS, although it will most likely increase the chances of success when applying for vacancies in the EEAS, EU delegations or EU institutions.

The idea of a European Diplomatic Academy is certainly a good one and takes into account the fact that Europe needs a coordinated strong voice not only in internal affairs but above all on the international stage. Dealing with increasingly delicate and demanding international affairs requires people who are professionally trained at the highest level and who know the problems and the European position on various issues when dealing with international partners. A well-prepared and operational European diplomatic body can only be an advantage in this regard.

There remains however, one important question : could this, in time, be only the beginning of what could later lead to a dramatic decline in the importance and influence of the national diplomacy of the European Member States on the international stage?