Supported by Eurojust and Europol, judicial and law enforcement authorities in France, Germany, Belgium, the Netherlands and the United Kingdom have dismantled a criminal network suspected of using small boats to smuggle up to 10 000 migrants across the English Channel over the last 12 to 18 months. It is believed to be the biggest ever international operation targeting small boat people smugglers.

During an action day, 39 suspects were arrested and over fifty locations were searched. Seizures include 1 200 lifejackets, close to 150 boats and 50 engines, several thousand euros in cash, firearms and drugs. The operation targeted the leaders of the criminal network, as well as its financial means.

The action dealt a severe blow to one of the most significant crime groups involved in cross-Channel migrant smuggling.

The investigation started in France on 30 November 2021, following the arrest of 16 suspects. It is believed that the organised crime group (OCG) has, among others, facilitated the smuggling of Vietnamese nationals from France to the UK. In order to do this, the criminal network set up a large infrastructure in Calais, France. The investigation showed that migrants were transported from France to the UK in motorised boats delivered from Germany.

The suspects charged on average EUR 2 500 to 3 500 per migrant, depending on the migrant’s nationality, to facilitate their transfer across the English Channel. At times, up to 15 boats were launched almost simultaneously, with half successfully making it across to the UK.

One of the members of the smuggling network was wounded by a gunshot in a migrant camp in France in September 2021. This incident is allegedly linked to a subsequent attempted murder case in Osnabrück, Germany, on 13 November 2021.

In Belgium, several cases of migrant smuggling showed links, and a separate case was started to dismantle the criminal organisation behind the supply chain.

The action is a result of close cooperation between the five countries involved, supported by Eurojust and Europol. During an action day on 5 July, 39 people were arrested and over fifty searches were carried out simultaneously. 1 200 lifejackets, close to 150 boats and 50 engines, several thousand euros in cash, firearms and drugs were seized. Over 900 police officers were deployed in the operation.

In France, nine suspects were arrested.

In Germany, the Osnabrück Public Prosecutor’s Office simultaneously executed a total of 18 European Arrest Warrants (EAWs) and 30 search warrants in four federal states on behalf of the Belgian and French authorities. The 18 suspects arrested by the German police are intended to be extradited and prosecuted in Belgium or France. Around 900 officers of the Federal Police and the Osnabrück Police Directorate participated in the action.

In the UK, six suspects were arrested during a series of raids in London. The National Crime Agency deployed around 50 officers.

In the Netherlands, six suspects were arrested and seven home searches were carried out.

The successful action demonstrates that good results can be achieved through intensive cooperation and information exchange, which is essential to tackling this growing form of human trafficking. The influx of migrants into the European Union is accompanied by degrading human smuggling practices. People smugglers often operate in international criminal organisations and their activities put lives at risk. The risky sea crossings and other forms of transit regularly result in casualties.

Tackling migrant smuggling is one of the priorities for the European Union, Member States and Eurojust. The role of the Agency has recently been enhanced in the renewed EU Action Plan against migrant smuggling, reinforcing the need for cooperation between the judiciary and law enforcement in Member States as well as with Europol.

Eurojust has built up extensive expertise in the field of migrant smuggling, with the Agency last year supporting 292 cases and 11 joint investigation teams. For instance, the Agency assisted with the taking down of a smuggling network which used taxis to transfer migrants through Greece, as well as helping to dismantle another organised crime group which smuggled Syrian migrants to the EU via the Hungarian border. Recently, the Agency also assisted in the successful takedown of a migrant smuggling network in Romania and Moldova.

Europol launched its European Migrant Smuggling Centre (EMSC) in 2016. The goal of the Centre is to proactively support EU Member States in dismantling criminal networks involved in organised migrant smuggling and human trafficking. The EMSC focuses on geographical criminal hotspots, and on building a better capability across the European Union to fight people smuggling networks. In 2021, Europol’s EMSC supported 55 on-the-spot action days and the identification of 26 High Value Targets. 28 758 SIENA messages related to migrant smuggling and human trafficking cases were received in 2021. 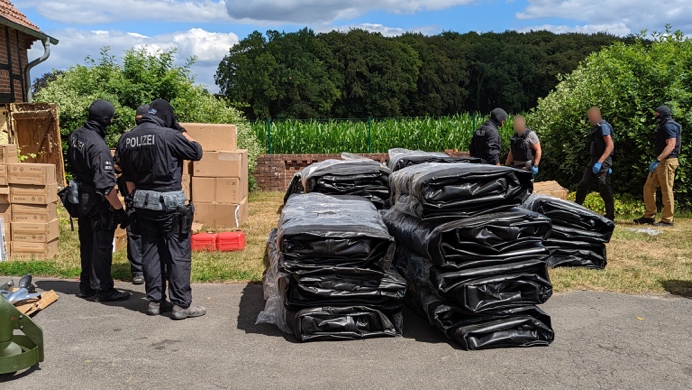 The following national authorities took part in the operations:

ILLEGAL STREAMING SERVICE WITH OVER 2 MILLION SUBSCRIBERS WORLDWIDE SWITCHED OFF