At 01:23:40 on 26 April 1986, the failure of a routine test at the Chernobyl Nuclear Power Plant in Ukraine, then part of the Soviet Union, caused reactor 4 to explode, releasing parts of its radioactive core. It was the worst nuclear accident the world had ever seen, with far-reaching political, economic and ecological consequences. Thirty-five years on, Chernobyl is still as well-known as it was a generation ago.

Fires broke out, causing the main release of radioactivity into the environment. Wind carried contaminated particles over Ukraine, Belarus and Russia, as well as parts of Scandinavia and wider Europe. The 50,000 inhabitants of the adjacent town of Pripyat were evacuated, never to return.

The accident destroyed reactor 4, killing 30 operators and firemen within three months and causing numerous other deaths in weeks and months that followed. To this day, it remains the only accident in the history of the civil use of nuclear power when radiation-related fatalities occurred. The precise number of short- and longer-term victims remains heavily disputed.

By 06:35 on 26 April, all fires at the power plant had been extinguished, apart from the fire inside reactor 4, which continued to burn for many days. Some 5,000 tonnes of boron, dolomite, sand, clay and lead were dropped from helicopters in a bid to extinguish the blaze. When the destroyed reactor was later enclosed in a provisional structure – the so-called sarcophagus – these fuel-containing materials were also walled in.

The sarcophagus was built under extremely hazardous conditions and unprecedented time pressure. By November 1986, a steel and concrete shelter was in place to lock away the radioactive substances inside the ruined reactor building and to act as a radiation shield. It was always intended as a temporary measure, with an estimated lifespan of 20-30 years.

The search for a long-term solution started soon after, alongside the massive challenge of cleaning up the accident site. By the end of 1991, the Soviet Union had dissolved and newly independent Ukraine had been left with the Chernobyl legacy. Following a G7 Action Plan to improve nuclear safety in central and eastern Europe, the Nuclear Safety Account was set up at the European Bank for Reconstruction and Development (EBRD) in 1993. Two years later, the scope of the programme was extended to include Chernobyl.

A breakthrough came with the Shelter Implementation Plan in 1997, which provided a road map of how to the tackle the immediate and longer-term tasks. In the same year, the G7 officially invited the EBRD to set up and manage the Chernobyl Shelter Fund, which became the main vehicle for all efforts to ensure that the destroyed reactor 4 remained in an environmentally safe and secure state.

Emergency repairs in 1998 and 1999 prevented the imminent collapse of the sarcophagus, as well as a vent stack that was endangering the adjacent turbine hall over reactor 3, which was still in operation. It was only at the end of 2000 that all nuclear power generation in Chernobyl ceased. The following year saw a landmark decision to build an arch-shaped steel structure, called the New Safe Confinement (NSC), to seal off reactor 4.

In the subsequent years, several tasks were carried out simultaneously. Detailed technical work on the NSC started. The site had to be stabilised and prepared for the construction work. The first project the EBRD managed was the construction of a liquid radioactive waste treatment plant (LRTP) to handle some 35,000 cubic metres of low- and intermediate-level liquid waste at the site. Meanwhile, the safe storage of the spent fuel assemblies from reactors 1, 2 and 3 came into focus.

All this has been achieved. The LRTP has been operational since 2014. A new interim storage facility for the treatment and storage of spent fuel has been built and, after successful hot tests, is currently awaiting a permanent licence from the Ukrainian regulator. The NSC, the most visible Chernobyl project, was slid into position in late 2016 and then handed over to the Ukrainian authorities.

In total, the Bank has managed close to €2 billion in donor funds through the Chernobyl Shelter Fund and Nuclear Safety Account. Of this, the EBRD provided €715 million of its own resources to complete the Interim Storage Facility and New Safe Confinement.

Today, the New Safe Confinement dominates the skyline over Chernobyl, as the sarcophagus once did. The steel structure is 108 metres high and 162 metres long, with a span of 257 metres and a lifetime of at least 100 years. It was assembled in two stages in a cleaned area near the accident site and, despite its size and weight of 36,000 tonnes, was pushed 327 metres into position. It is the largest moveable structure ever built.

This is not where the story ends, however. The fact that the NSC has a lifespan of 100 years means that the next phase of work now has to be planned, agreed and implemented. The estimated 200 tonnes of radioactive nuclear fuel inside reactor 4 are now shielded by the New Safe Confinement. However, parts of the sarcophagus are becoming unstable and will have to be removed at some point. Once this is done, work will come closer to the reactor’s interior.

The EBRD remains a key partner in these efforts. Following a request by Ukraine, in November 2020, the Bank established the new International Chernobyl Co-Operation Account, aimed at creating an integrated plan for the site to serve as the basis for developing and implementing longer-term projects. The new fund will hold it first assembly meeting on Tuesday – fittingly one day after the 35th anniversary. The Chernobyl story continues.

The State Nuclear Regulatory Inspectorate of Ukraine has granted the SSE Chornobyl NPP an operating license for the nuclear facility, thus authorizing the load of spent nuclear fuel into the dry storage systems.

This became possible following successful «cold» and «hot» testing carried out at the facility, elimination of faults noted in the comments during the tests, and approval of the Final Safety Analysis Report which involved large amount of works performed by the ChNPP staff aimed at ensuring safety of the new SNF storage facility.

The culmination of the activities was 18 November and 14 December 2020, when two double-walled canisters (DWC – patent held by Holtec International) loaded with RBMK spent nuclear fuel were successfully placed for storage into the Interim Spent Fuel Dry Storage Facility 2 (hereinafter – ISF-2). The loading was done by operators trained by Holtec.

«Based on the discussion, the Regulator suggests that the conclusions of the nuclear and radiation safety expert review of the «Interim Spent Fuel Dry Storage Facility. Final Safety Analysis Report» submitted by SSE Chornobyl NPP be endorsed. Authorize the Nuclear Facilities Safety Department to carry out license issuing activities to award the SSE Chornobyl NPP an operating license for the ISF-2 nuclear facility operation», — said SNRIU Chairman Hryhorii Plachkov. Flawless performance of «hot» tests carried out by ChNPP personnel in Autumn 2020, and obtaining a license is the result of the efforts taken for more than two decades aimed at putting this important facility into operation.

«This essential milestone has been achieved due to years of dedicated work and joint efforts by ChNPP, Holtec, SNRIU, SSTC NRS and other involved parties. Obtaining an operating license shows that the technology and handling processes for spent nuclear fuel introduced at ISF-2 meet current legislative requirements of Ukraine and IAEA recommendations, and ensure the safe management of ChNPP spent nuclear fuel. Activities on transferring spent fuel assemblies from the wet-type spent fuel storage facility to ISF-2 are going to be our top priority», — said ChNPP Acting Director General Valeriy Seyda.

About 21 thousand spent fuel assemblies will be transferred from the old wet-type spent fuel storage facility, processed, loaded into canisters and placed for storage.

The ISF-2 was designed to process the minimum annual capacity of 2500 spent fuel assemblies.

ISF-2 construction was financed through the Nuclear Safety Account and by the European Bank for Reconstruction and Development. 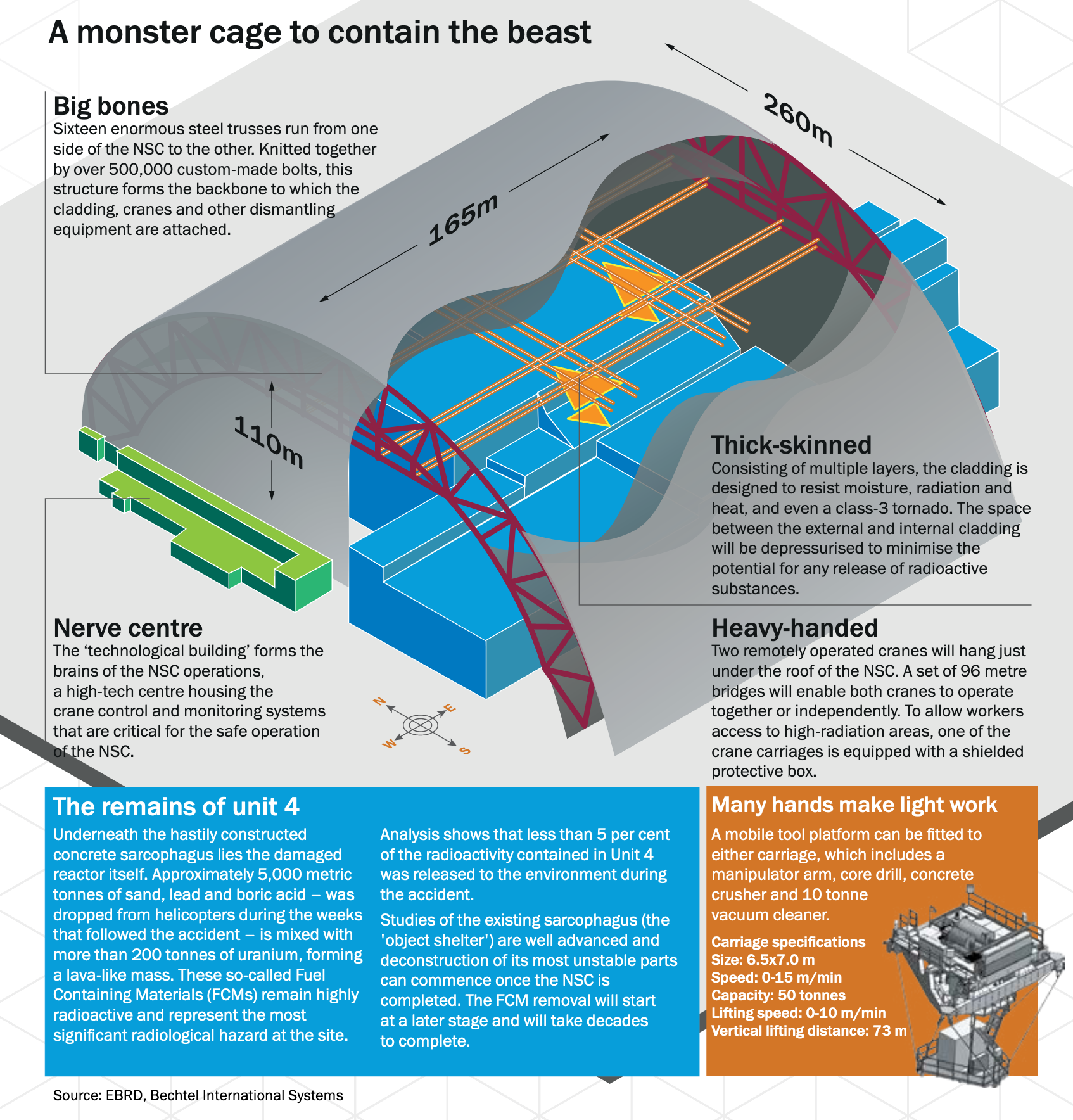 CHERNOBYL, APRIL 26, 1986 A date and place that history will never forget

FRIENDS, ENEMIES AND LOOPHOLES Military proliferation through the back door