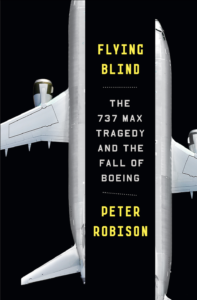 THE 737 MAX TRAGEDY AND THE FALL OF BOEING

Boeing is a century-old titan of industry. It played a major role in the early days of commercial flight, World War II bombing missions, and moon landings. The planemaker remains a cornerstone of the U.S. economy, as well as a linchpin in the awesome routine of modern air travel. But in 2018 and 2019, two crashes of the Boeing 737 MAX 8 killed 346 people. The crashes exposed a shocking pattern of malfeasance, leading to the biggest crisis in the company’s history—and one of the costliest corporate scandals ever.

How did things go so horribly wrong at Boeing?

Flying Blind is the definitive exposé of the disasters that transfixed the world. Drawing from exclusive interviews with current and former employees of Boeing and the FAA; industry executives and analysts; and family members of the victims, it reveals how a broken corporate culture paved the way for catastrophe. It shows how in the race to beat the competition and reward top executives, Boeing skimped on testing, pressured employees to meet unrealistic deadlines, and convinced regulators to put planes into service without properly equipping them or their pilots for flight. It examines how the company, once a treasured American innovator, became obsessed with the bottom line, putting shareholders over customers, employees, and communities.

By Bloomberg investigative journalist Peter Robison, who covered Boeing as a beat reporter during the company’s fateful merger with McDonnell Douglas in the late ‘90s, this is the story of a business gone wildly off course. At once riveting and disturbing, it shows how an iconic company fell prey to a win-at-all-costs mentality, threatening an industry and endangering countless lives. 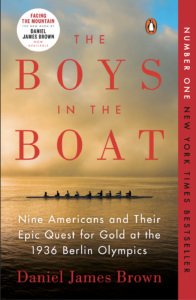 THE BOYS IN THE BOAT

Soon to be a major motion picture directed by George Clooney

For readers of Unbroken, out of the depths of the Depression comes an irresistible story about beating the odds and finding hope in the most desperate of times—the improbable, intimate account of how nine working-class boys from the American West showed the world at the 1936 Olympics in Berlin what true grit really meant.

It was an unlikely quest from the start. With a team composed of the sons of loggers, shipyard workers, and farmers, the University of Washington’s eight-oar crew team was never expected to defeat the elite teams of the East Coast and Great Britain, yet they did, going on to shock the world by defeating the German team rowing for Adolf Hitler. The emotional heart of the tale lies with Joe Rantz, a teenager without family or prospects, who rows not only to regain his shattered self-regard but also to find a real place for himself in the world. Drawing on the boys’ own journals and vivid memories of a once-in-a-lifetime shared dream, Brown has created an unforgettable portrait of an era, a celebration of a remarkable achievement, and a chronicle of one extraordinary young man’s personal quest. 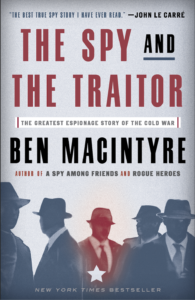 THE SPY AND THE TRAITOR

THE GREATEST ESPIONAGE STORY OF THE COLD WAR

“The best true spy story I have ever read.”—JOHN LE CARRÉ

If anyone could be considered a Russian counterpart to the infamous British double-agent Kim Philby, it was Oleg Gordievsky. The son of two KGB agents and the product of the best Soviet institutions, the savvy, sophisticated Gordievsky grew to see his nation’s communism as both criminal and philistine. He took his first posting for Russian intelligence in 1968 and eventually became the Soviet Union’s top man in London, but from 1973 on he was secretly working for MI6. For nearly a decade, as the Cold War reached its twilight, Gordievsky helped the West turn the tables on the KGB, exposing Russian spies and helping to foil countless intelligence plots, as the Soviet leadership grew increasingly paranoid at the United States’s nuclear first-strike capabilities and brought the world closer to the brink of war. Desperate to keep the circle of trust close, MI6 never revealed Gordievsky’s name to its counterparts in the CIA, which in turn grew obsessed with figuring out the identity of Britain’s obviously top-level source. Their obsession ultimately doomed Gordievsky: the CIA officer assigned to identify him was none other than Aldrich Ames, the man who would become infamous for secretly spying for the Soviets.

Unfolding the delicious three-way gamesmanship between America, Britain, and the Soviet Union, and culminating in the gripping cinematic beat-by-beat of Gordievsky’s nail-biting escape from Moscow in 1985, Ben Macintyre’s latest may be his best yet. Like the greatest novels of John le Carré, it brings readers deep into a world of treachery and betrayal, where the lines bleed between the personal and the professional, and one man’s hatred of communism had the power to change the future of nations. 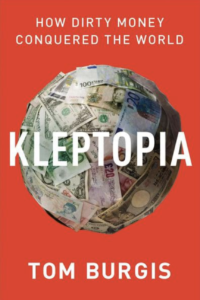 HOW DIRTY MONEY IS CONQUERING THE WORLD

In this shocking, meticulously reported work of narrative nonfiction, an award-winning investigative journalist exposes “capitalism’s monster”—global kleptocracy—and reveals how it is corrupting the world around us.

They are everywhere, the thieves and their people. Masters of secrecy. Until now we have detected their presence only by what they leave behind. A body in a burned-out Audi. Workers riddled with bullets in the Kazakh Desert. A rigged election in Zimbabwe. A British banker silenced and humiliated for trying to expose the truth about the City of London.

They have amassed more money than most countries. But what they are really stealing is power.

In this real-life thriller packed with jaw-dropping revelations, award-winning investigative journalist Tom Burgis weaves together four stories that reveal a terrifying global web of corruption: the troublemaker from Basingstoke who stumbles on the secrets of a Swiss bank, the ex-Soviet billionaire constructing a private empire, the righteous Canadian lawyer with a mysterious client, and the Brooklyn crook protected by the CIA.

Glimpses of this shadowy world have emerged over the years. In Kleptopia, Burgis connects the dots. He follows the dirty money that is flooding the global economy, emboldening dictators, and poisoning democracies. From the Kremlin to Beijing, Harare to Riyadh, Paris to the White House, the trail shows something even more sinister: the thieves are uniting. And the human cost will be great. 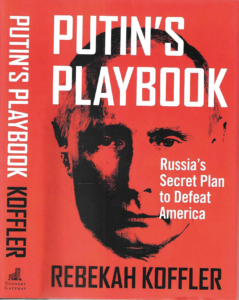 The “Russian collusion” hoax not only poisoned American politics but also sowed confusion about the real Russian threat to the United States. President Vladimir Putin wasn’t colluding with the Trump campaign, but as a former U.S. intelligence specialist makes clear in this eye-opening book, the judo-loving ex-KGB agent most certainly has a plan to defeat the United States
Born and raised in the Soviet Union, Rebekah Koffler came to America as a young woman. After 9/11, she joined the Defense Intelligence Agency, devoting her career to protecting her new country. Now she reveals in chilling detail Putin’s long-range plan– his “playbook”–to weaken and subdue the United States, preparing for the war that he believes is inevitable.
With the insight of a native, Koffler explains how Russians, formed by centuries of wartorn history, understand the world and their national destiny. The collapse of the Soviet empire, which Putin experienced as a vulnerable KGB agent in East Germany, was a catastrophic humiliation. Seeing himself as the modern “Czar Vladimir” of a unique Slavic nation at war with the West, he is determined to restore Russia to its place as a great power.
Koffler’s analysis is enriched by her deeply personal account of her life in the Soviet Union. Devoted to her adopted homeland but concerned about the complacency of her fellow citizens, she appreciates American freedoms as only a survivor of totalitarianism can. An opportunity to view ourselves and the world through the eyes of our adversary, Putin’s Playbook is a rare and compelling testimony that we ignore at our peril.

AT THE BRITISH MUSEUM – HOKUSAI THE GREAT PICTUREBOOK OF EVERYTHING